What should you do if you find yourself driving a car in unideal conditions that may lead to a skid? Car Skidding: What It Is, How to Avoid It, What to Do If It Happens will explain what car skidding is and how it occurs, what you can do to prevent it, how to react if you begin to skid, and the difference between a two-wheel versus four-wheel skid. 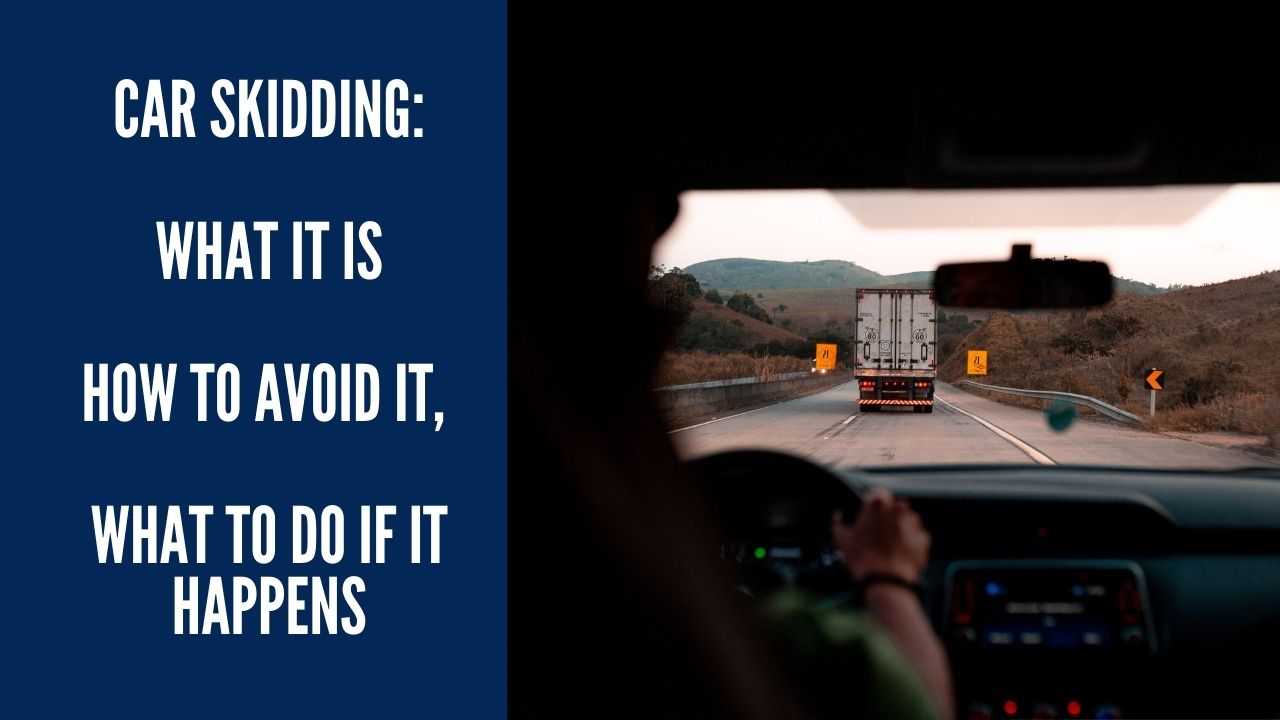 A car skid is an occurrence in which a car’s tires are sliding and unable to build their standard traction on the road. There are steps you can take to avoid a car skid, and things to do if it happens.

A car skid can be dangerous for the driver and those around them. Several different things impact the outcome of a car skid, but if you know what to expect you may be able to avoid an accident.

What is Car Skidding

A car skid is a condition where one or multiple tires do not have a grip on the road. This scenario can feel scary to the driver, as if they may start spinning out of control or crash.

In the instance of a skid the driver of the car does not have control over the direction the vehicle is heading. The overall handling of the car becomes compromised.

Car skids can vary in significance including, severe skids and subtly skids that are hardly recognizable to the driver. he car itself has characteristics that can promote or prevent a skid including, tire traction, and gear.

Why Does a Car Skid? 5 Most Common Causes

Most car skids result from a combination of factors. For example, a rainy day and over-aggressive accelerating. To avoid a car skid, it is important to know what the underlying causes are. Drivers can practice defensive driving when experiencing conditions that commonly lead to a car skid. The five most common causes of a car skid are:

How to Prevent A Car from Skidding

To prevent a car from skidding there are a few simple things you can do. When you drive defensively you can stop a skid in its tracks. The most ideal way to control a car skid is to know how to avoid it.

Drive with the weather in mind. Poor weather conditions often attribute to a car skid. Pay attention to the condition of the road. If it is raining be aware of hydroplaning. Hydroplaning is when a car slides uncontrollably due to a wet surface.

Check your tire treads regularly. The treads on a car’s tire are the raised portion of the tire’s exterior. Treads are responsible for traction between the wheel and the road. To check your tire treads, place a penny facing head down into your tread groove. If you can see the top of Lincoln’s head your tire tread is worn and should be changed.

Watch your speed when taking turns. Car skids do not occur simply from taking a turn. However, when that turn is coupled with bad weather or high speeds it can result in a skid.

Utilize your vehicles gear options. When a car is functioning properly the wheels will be spin and build traction on the road. Many cars offer a range of gears to promote positive traction. You should drive in a high gear when there are variables in play, such as snow, that could cause a skid.

What To Do if Your Car Skids

If you find yourself in a car skid there are steps you can take to ensure your safety and regain control. There are also things you should avoid doing.

Steps to Take While Experiencing a Skid

Doing these key steps when experiencing a car skid could be the difference between a serious accident and a close call. The actions you take will be essential to the outcome. Here is what you should do:

Things to Avoid Doing While Your Car is Skidding

There are things a driver can do that will make a car skid much more dangerous. Outcomes such as, a car accident, totaling your vehicle, injury, or even death can occur when a skid is not properly handled. The following reactions will create a more dangerous situation.

Slamming on your brakes: When you thrust down on your brakes you are activating your anti-lock braking system. The anti-lock braking system typically works in favor of protecting you from a skid. Unfortunately, if your brakes are worn slamming on the brakes can have the opposite effect during a skid. Slamming on the brakes can also cause the front wheels of your vehicle to lock up, creating a spinning motion when the back wheels continue to shift, resulting in a skid.

Driving too fast: Driving too fast for the road conditions is the most common cause of a car skid. Pay attention to the speed limit and road signage.

How to Regain Control of a Skidding Car

Step 1: Stay focused – Take your foot off the pedals, and keep your hands on the steering wheel.

Step 2: Steer into the skid – Determine the best direction to go and lightly turn your wheel towards your desired destination.

Step 3: Steer away from the skid – Once you are positioned towards your target turn the wheel back slightly so that you do not over rotate.

Step 6: Slow to a stop – Eventually when you are not accelerating your car will slow to a stop. You can somewhat control your stop by gently turning the wheel where you would like to go.

Step 7: Drive smoothly – Once you have regained control drive smoothly by lightly using the accelerator and brakes, gently turning the steering wheel when needed, and driving in a slow coast for the duration of your trip.

If you find yourself in a car skid remember, don’t panic. You now know what to do, and also what to avoid. Follow these easy steps to regain control.

There are four different types of drive including: front-wheel, rear-wheel, all-wheel, and four-wheel. It is important to know how your vehicle stands up in comparison. I will compare and contrast the most popular style, front-wheel drive, to the more superior style four-wheel drive.

– The engine is limited to powering only the front axle.

– Electronic stability control available in model made after 2012.

– Better traction when turning, and accelerating compared to rear-wheel; however, inferior traction to all-wheel and four-wheel.

– Potential for torque steer. Torque steer causes the car to gravitate towards one side.

– Wears out faster than other options.

– The engine is able to power both the rear axle and the front axle.

– Made to traverse water and other skid hazards.

– Electronic stability control available in models made after 2012, and select models prior to 2012.

– Better traction when turning, and accelerating compare to rear-wheel and front-wheel; however, inferior traction to all-wheel.

It may be time to check your tires and evaluate your vehicles performance in key skid hazards before you hop in for your next drive. Remember, snow, ice, and rain can all be big contributors to a car skid; however, in most cases there will be a couple of influential factors. Keep your eyes peeled for road signs, and if a skid can’t be avoided don’t forget to stay calm, steer into the skid, and regain your control. Road safety is a top priority for me, and it should be for you too. If you feel passionately about preventing car skids please share your story in a comment below!

Why Is There Rattling Noise Coming From Front Passenger Side When Driving?
What Are the Gauges in a Car?
Best Microfiber Towels For Car
How Much Does It Cost to Replace a Car Battery
Which Toyota Camry Has Leather Seats?
What to Do If Someone Parked an RV in Front of Your House
Best Light Truck Tires
Best OBD2 Bluetooth