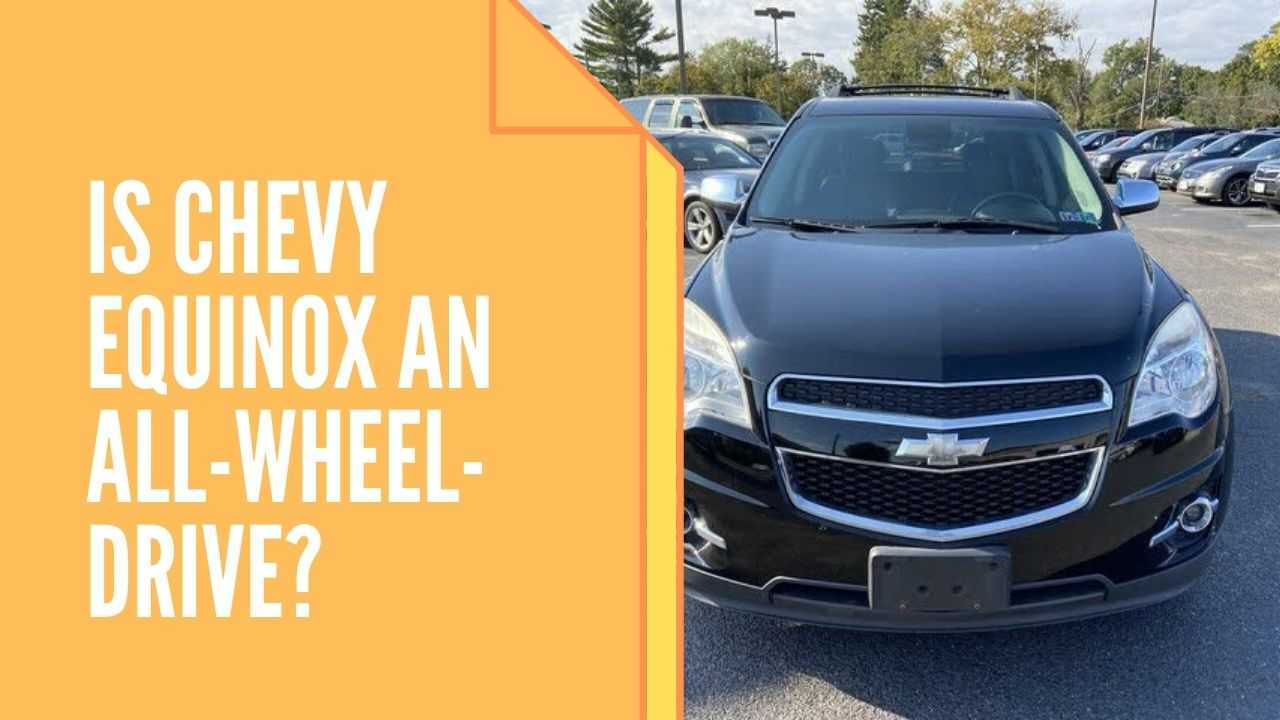 The first Chevy Equinox came out on the market in 2005. The 2018 models have been recently updated and the 2019 and 2020 models have yet to change much since then. In 2020, the Equinox will be offered in the L, LS, LT, and Premier models. There will not be a diesel Equinox in 2020, however, it did get a 4.4 expert rating from Kelley Blue Book. In addition to the many different color options, the Equinox also comes with many standard features such as different engine options, fuel efficiency, towing options, safety features, and of course, all-wheel-drive.

Is Chevy Equinox an All-Wheel-Drive?

The Chevy Equinox crossover vehicle comes standard as a front-wheel-drive (FWD) vehicle. The all-wheel-drive (AWD) is available only for the LT, LS, and Premier trim levels. It is not available for the basic L trim level.

The Chevy Equinox all-wheel-drive is a part-time feature because the driver has to choose to enable the AWD. This is usually done for changing road conditions for traction and handling. This vehicle is a front-wheel-drive crossover. This means that it sends power to the front axle most of the time. Once it is started up, it will transfer power to the wheels that slip. The best time to use the AWD is when the roads are slippery, wet, muddy, or rough.

What is nice about the Equinox only being a part-time with AWD is that it helps with gas efficiency. The vehicle can get about 26 miles per gallon (mpg) in the city and 31 mpg on the highway. Models that have larger engines get about 22 mpg in the city and 29 mpg for highway driving. Vehicles that have AWD mode on all the time get about one mpg less in fuel efficiency. That means it would get 25 mpg for city driving and 30 mpg when driving on the highway.

Most crossover Equinox vehicles have AWD but are not all part-time. The GMC Terrain has a Traction Select AWD feature which allows the driver to choose calibration with a push of a button. The Terrain has FWD, AWD with traction for towing traction, off-road, and additional sport. The Hyundai Tucson is also not part-time. It has an AWD ‘lock’ feature. This means that the driver can lock all four tires into AWD mode. The AWD lock feature is meant for slow driving speeds including off-road, slippery, or muddy road conditions.

There are automatic AWD systems in which it is on all the time. The vehicle uses digital sensors in the wheels to monitor traction. When there is a loss of traction, power is given to the wheel or wheels that are slipping.

The Equinox low-speed four-wheel drive for the L4 and low-speed two-wheel drive for the L2 models. Neither are actually used during regular road conditions. The L4 will disengage the all-wheel drive. The L4 will then drive all four wheels and once the L4 is disconnected the AWD will return if it is engaged or the four-wheel-drive will continue. Low-speed gears are supposed to be used at slow speeds during slippery or wet road conditions.

Using the all-wheel drive in the snow is completely up to driver preference and experience with driving. Four-wheel drive vehicles do well in the snow and the AWD will provide traction. It is still important to drive carefully in the snow to avoid accidents.

How Much Can a Chevy Equinox Tow?

What is the Engine Horsepower of Chevy Equinox?

The most basic of the 2020 Chevy Equinox has a horsepower of 170. These models have a 1.5-liter four-cylinder engine with 6-speed automatic transmission. That is actually exceptionally low horsepower for an SUV, especially since the Chevy Suburban and Chevy Tahoe get 355 horsepower. Even the Chevy Traverse as 310 horsepower. The Chevy Trax is one of the few SUVs with lower horsepower than the Equinox at 138 horsepower. Instead of a 1.5-liter engine, there are models that also come with a 2.0-liter turbo engine. This engine gets 252 horsepower with a 9-speed automatic transmission which is quite an increase from 170 horsepower. With this much of an increase, the vehicle can pull 3,500 pounds. Still, compared to other vehicles, that is not very much. The Dodge Durango can tow about 6,200 pounds. Here are some vehicles that have way more horsepower than the Equinox: Jeep Grand Cherokee Trackhawk (707) and Audi Q8 (340). Still, with the 2.0-liter engine, the Kelley Blue Book says that the engine ‘delivers quite the kick.’

If a driver would like to increase the SUV horsepower, it can be done by adding a performance chip. This can increase the Equinox’s horsepower by about 35. There are drawbacks to using a chip, however. It will cause the engine to work harder and decrease gas mileage and increase emissions.

The Chevy Equinox could also be modified to improve the engine. But that is rarely necessary. It is actually easier and probably cheaper just to get a vehicle that has more horsepower from the very beginning. An important question to ask is what kind of driving the vehicle is going to be doing most of the time. Is it going to be doing a lot of city driving, mostly highways, or pulling large heavy loads most of the time? With that question answered, it is easier to decide if the Chevy Equinox is the right vehicle for you. Do not forget that the Equinox is also a very safe SUV to drive.

The Chevy Equinox has a five-star safety score from the National Highway Traffic Safety Administration. It has automatic emergency braking, following distance indicator, rear vision camera, airbags, IntelliBeam headlamps, forward collision alert, lane assist, and lane departure warning, and teen driver assist. It even has start/stop engine technology that shuts the engine off at certain times, like at red lights. The engine will then restart once the brake pedal has been released. Finally, it has a great infotainment 3 system that allows for communication, navigation, and entertainment that can be safely used while driving.

It is not always necessary to buy a new Chevy Equinox such as the 2020 Chevy Bolt event though it can be tempting. New vehicles are more expensive, obviously. 2018 or 2019 Equinox models that have all-wheel-drive include the LS 1.5L Turbo, the LT 1.5L Turbo, the LT 1.6L Turbo Diesel, the Premier 1.5L Turbo, the Premier 1 Turbo Diesel, and the Premier 2.0 Turbo. There are advantages to buying new though. However, the 2020 Chevy Equinox has a 3-year or 36,000-mile warranty as long as the vehicle is new. Corrosion from defects is covered and rust-through corrosion is covered for up to 6-years or 100,000 miles. Finally, there is a 5-year or 60,000-mile powertrain limited warranty.

There are a lot of features associated with the Chevy Equinox including all-wheel drive, different safety features, engines, colors, fuel efficiency, and towing possibilities. It is up to the person buying the SUV to make a decision on which of the perfect five stars Chevy Equinoxes to choose. It does not even have to be new. This list of traits and characteristics of the different models is a great place to start when looking for ideas for that perfect new or used Equinox. Finally, the Chevy Equinox is a very safe vehicle. What more could a person ask for when it comes to choosing a new or used vehicle?