Most of us have been in situations where a friend or a relative needs to borrow the car for a few days. However, once it becomes clear that the borrower doesn’t intend to return the vehicle soon, you may consider reporting it to the police. Reporting a car as stolen sounds easy, but when borrowed? 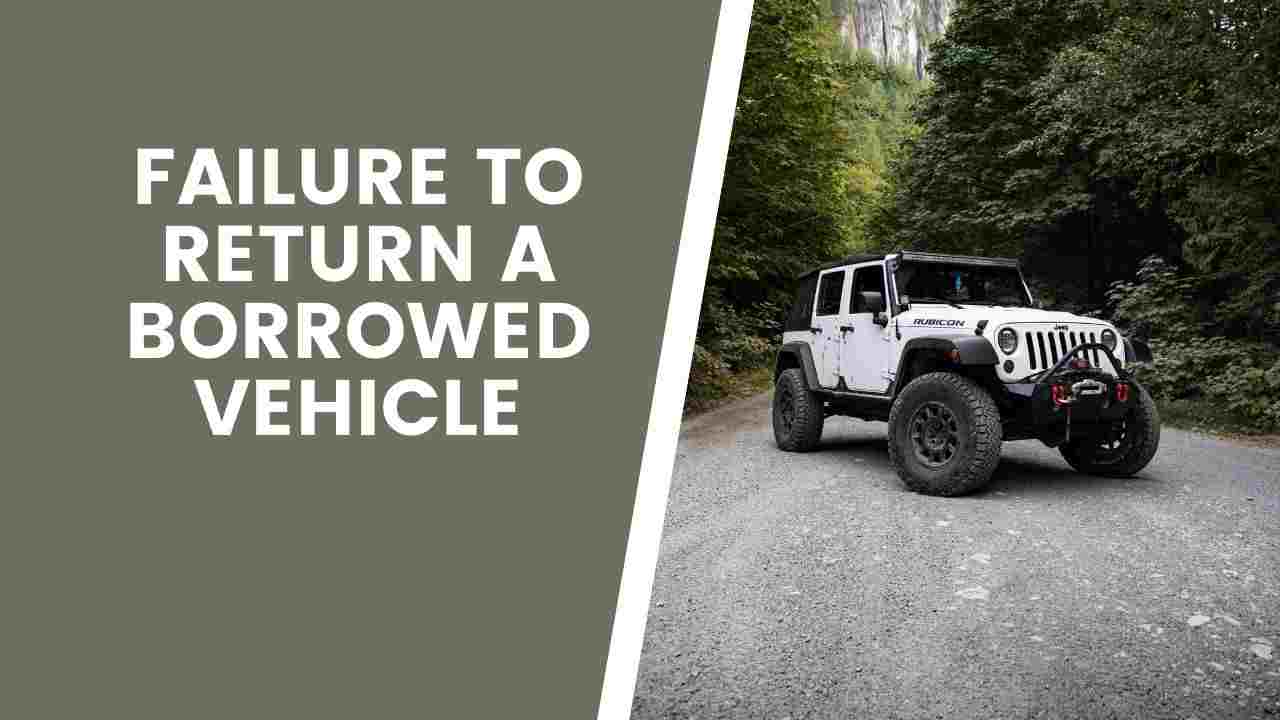 You can report your car as stolen when borrowed, though it first requires you to rescind permission to use the car. This is done by letter and must include language that specifically removes permission from the borrower to further operate the car. The letter should also include a description of the car, such as the make and model, color, license plate, and VIN. If the letter isn’t responded to or goes unclaimed, you can then report your car as stolen, though you must be willing to possibly press charges and testify in court against the person to whom you loaned your car.

Pressing charges and testifying in court against someone with whom you may have a meaningful relationship can make you feel like you’re exaggerating the situation. However, as days turn into months and your car is out of your possession for longer, you may grow anxious about the true intentions of the borrower.

Reporting A Car Stolen When Borrowed – Can You Do That?

It’s entirely possible that someone can make the honest mistake of forgetting to return your borrowed car, despite how inane and wild it may sound. Equally, if the borrower forgot to return the car to you, it doesn’t amount to theft if they genuinely forgot.

Accusations of stealing a car when borrowed heavily rely on two things:

Intent to steal the car: The intention for someone to commit a criminal act is called “mens rea,” or an individuals mental state. This allows police and the courts to decide if someone deliberately set out to steal your car and not return it, or borrowed your car and unintentionally didn’t return it.

Proof that they stole it: The prosecution is tasked with proving without a doubt that the borrower of the car intended never to return it. This can be done by observing the actions leading up to the offense, or can be proven by email or text if the borrower happens to brag about having the car. Even in the event that someone happens to have your property, a lack of intent and proof to steal means there might not be a case. However, the borrower would also need an alibi to establish their own innocence.

Motive: Motive is what allows prosecutors to prove that a crime was done with intention and knowledge that it was criminal. In the case of a stolen car, if you recently had an argument or disagreement with the person you loaned it to, that can be the evidence required to prove that they willingly stole your car. On the other hand, a lack of motive provides the defense with reasonable doubt against stealing your car.

Altogether, mens rea plays a major role in determining the mindset behind someone who appears to have stolen your car after borrowing it. Once you’ve determined if someone has honest intentions or not, you can begin the process of locating your stolen car.

How Do I Get My Car Back From Someone Who Borrowed It?

Although your first reaction may be to file a police report, it may prove difficult to convince officers that your property is stolen, despite being borrowed. As it was voluntarily given away, police may deem that there was no crime committed.

To get your car back from someone who borrowed it, first you’ll need to send the borrower a message (written, text, email) stating that they no longer have permission to drive the car.

Include a description of the car. Your description should include the make and model of your car, it’s color, the year, license plate number and VIN number. Additionally, make sure your language conveys that the borrower no longer has permission to operate the car. Refrain from asking them to return it to you directly, as it implies that they can still use the car.

Set an ultimatum. Include a warning that you’ll report the car stolen if not return within a specific time frame, such as 24 hours, or by a specific date.

Note when the message was sent/received. If you choose to mail your letter, opt for a Registered Mail-Return Receipt. This helps to notify you if the person has received the letter or not. If a text message or email, take note of the time and date it was sent for your records.

Call the police. If you’ve followed the above instructions and still haven’t received a response, now is the time to call the police. Though in some places you may have to wait a certain amount of time after the mail receipt, being cooperative with police can easily get the ball rolling on finding your stolen car.

At this point, you’ll also need to be fully prepared to appear in court, and press charges against the person you loaned the car to.

How Long Does It Take For The Police To Find A Stolen Car?

Police utilize different methods to track down your car, though ultimately, the length of time it takes to find your vehicle depends on a variety of factors. Even so, most agencies have dedicated teams of officers for retrieving stolen cars.

Here are some factors that may affect how long it takes to get your car back:

The region you live in: Overall, less than half of cars that were stolen are returned, though it varies depending on the region you live in. For example, stolen cars found in the Northeast are found faster than cars stolen in the Midwest. However, stolen cars in the Northeast are less likely to be recovered than the Midwest. On average nationwide, it takes around 11 days for a stolen car to be found.

Tracking your car: If you have GPS tracking installed on your car, chances are the tracking company may have information on the whereabouts of your car. Additionally, if you happen to have any electronic devices or non-GPS tracking devices, like a toll detector, this can aid in finding your vehicle sooner.

Helpful clues or tips: Installing security cameras to monitor your front yard and immediate surroundings can be a night and day different for finding your car. In the case of a borrowed car, tips on the last known location of the individual driving it as well as any places they frequent will aid the police exponentially.

Although some of these factors are out of our control, others can make the job of the police far more feasible. On top of that, preemptively modifying your car to prevent a total loss eases the worry that your car may be stolen and never seen again.

Is Borrowing Something And Forgetting To Return It Stealing?

It’s rare that, in the case of a large piece of property such as a car, one would genuinely forget to return it. That said if it does happen that the person you loaned your car to forgot to return it, it wouldn’t count as stealing depending on the circumstances.

The person you loaned it to never intended to return it. To accuse someone of theft, it would require the person to have never had the intent to return your car. With criminal law, the intent to commit a criminal act is one of many key elements that need to be established in the process of conviction. In the case of the theft of your car (or larceny in general), a charge would require the specific intent to keep another individual’s property.

The burden of proof may be difficult to overcome. When it comes to pressing charges and eventually prosecuting someone you suspect stole your car, the prosecution relies on the burden of proof. Essentially, prosecutors have to reveal specific intent to show that the person you loaned the car to had no intention to return the item and planned to keep it as their own. Because of this, crimes of this nature require strong, credible evidence to establish guilt. An example of this would be your friend loaning you a bike. If you were to ignore his requests to return it, it would look very similar to stealing on your part.

What If My Stolen Car Is Never Found?

With a stolen car, claims are treated as if they’re a total loss from a car accident. However, car theft is considered a non-collision event, meaning you would have to manually opt in for comprehensive insurance. Comprehensive insurance specifically helps to replace or repair your vehicle if it’s stolen or damaged otherwise that isn’t the result of a collision.

The way that comprehensive insurance protects your vehicle relies on two factors:

The ACV (Actual Cash Value) of your car: The ACV, or actual cash value of your car represents your car’s current market value and depreciates from the moment you drive it away from the dealer. This means the ACV of your car is based on the market value after depreciation, rather than based on the price you paid for it. In the event that you retrieve your stolen car from the thief, comprehensive coverage can even help you pay for damage done to the vehicle while it was out of your possession.

Most insurance companies wait close to a month before counting the theft of your car as a total loss. Once the claims process begins, an insurance adjuster will launch an investigation into your claim.

How Does Insurance Handle A Stolen Car?

Repeating an earlier point, insurance won’t be able to help you unless you first have comprehensive coverage on your policy. This type of insurance covers theft or other damage to your car not caused by an accident, such as falling objects or water damage. It also covers stolen car parts or damage as a result of a break-in.

When submitting a car theft claim, most insurance companies may ask you for the following information:

Overall, insurance companies take theft extremely seriously and make sure to conduct thorough investigations into claims. This means you should expect some pretty tough questions, especially if your claim appears the slightest bit suspicious. It’s important to remember to never take it personally, as it’s the adjuster’s job to prevent any fraudulent claims.

Some common red flags for insurance adjusters include:

Altogether, expect some pretty tough conversations if your claim appears even the slightest bit suspicious. As long as you answer investigators’ questions, they should be able to locate the person who has your car.

Living through the experience of someone stealing your car can be a harrowing one, especially if done by a trusted individual. However, preemptively installing tracking equipment in your car, as well as signing a contract before loaning the car can help you in the event that something like this happens.

What Are the Gauges in a Car?
How To Get Gum Off Your Car Seat
Can A Toyota Camry Drive In Snow?
Best Oil Filter
Car Skidding: What It Is, How to Avoid It, What to Do If It Happens
What Happens If Your Brakes Overheat?
Best Winch (for Trucks, SUV’s, UTV’s and ATV’s)
Best Tire Pressure Gauge