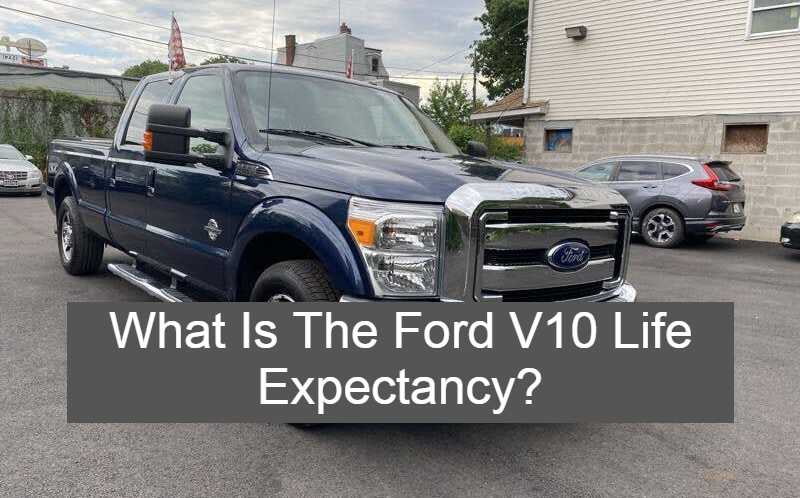 So, you’re looking to buy a used heavy-duty truck, and Ford is at the top of that list. Now you find yourself curious about just how much can be gotten out of that the V10. Well, read no further! My fathers say the V10 will outlast any truck on the road, so go ahead and buy it! I kid, I kid! But I have done my research, you know, just to put his thoughts to the test! And what I have found, is that for the most part, he isn’t wrong.

So, is it worth the investment? Will it last, and how long? Or, are you better off just forking up the dough to get that new diesel? Well, I’ve done some extensive research to hopefully answer all those pesky little questions that have been hiding out in the back of your mind.

The Ford V10 is a reliable engine that can last for at least 200,000 miles. This means it’s not going to give you any major problems as long as the vehicle has been well cared for throughout its life and regular maintenance procedures are followed. The fact that this engine was used in so many different vehicles for commercial buyers should tell us something about its durability – after all, these people won’t put up with weak or fidgety engines! So if you have a V10 under your hood, don’t worry too much about how old it is – just make sure you take care of it by following recommended service guidelines and enjoy your truck ride.

Now there is a lot more to consider with this “powerhouse” of an engine than just how long it will last. So, let’s find out if the Ford V10 is right for you. Keep reading as we go through the “oohs and ahhs” of this beast, and in the end, we will see what you think!

Factors That Will Affect The Ford V10 Life Expectancy:

There are a few things that can affect the life expectancy of your Ford V10, but most of these things you can control. Remember, you should care for your vehicle as you would a child. You MUST nurture it for it to survive!

Maintenance: I know, I know, it’s like we are beating a dead horse here! But maintenance is crucial for any engine, not just the V10. How can you expect to get 200,000+ miles out of it if you can’t even remember the last oil change? So, get the oil changed, keep your fluid up to par, get the flushes done, and replace the filters. It will pay off for you in the end.

Hauling/Towing: Yes, this beast is made for hauling things around, but how much you do it will ultimately have an impact on the life of your engine. Also, trying to tow more weight than the engine can handle could cause serious damage to your V10.

Fuel Quality: Using a good quality gasoline can reduce engine deposits which help with the life of your engine, as well as increasing the performance of your vehicle.

Your driving style: A lot of the engine’s lifespan depends on how you drive. If you’re constantly revving the engine, or redlining it, acting like you’re in a race every time you take off, then you can expect for things to wear out rather quickly.

So, keep these things in mind while trying to extend the life of your V10. These are all simple things that could save you tons on the money front!

Is The Ford V10 Reliable?

While the reliability of any engine hangs on the balance of proper maintenance and care, these engines seem to be very reliable overall.  If you can, check maintenance records, to ensure the vehicle was maintained as it should’ve been. This can ease a lot of tension for you. With that being said, the V10 is used in a lot of commercial vehicles, that alone should confirm its reliability. And let’s face it, Ford knows what they’re doing when it comes to engine design!

After reading many, many reviews, the only two main problems that I’ve seen are spark plug issues (which can be avoided) and exhaust studs breaking (which cannot be avoided). Neither of the two seems to be too costly of a repair. Besides these issues, most people claim to have no other known headaches from the V10. Well, except feeding the beast! At 9-10 MPG city, and 12-14 MPG hwy, gas can get pretty costly in this thing!

So, with proper care for your engine, you should have no problem getting at least 200,000 miles out of this beast!  In fact, one owner claims to have over 400,000 miles on his V10 and never had any major problems. Again, it has the durability of a diesel. There are not a lot of cars or trucks on the road today that get this kind of lifespan, period!

Disclaimer: Keep in mind that these numbers are not exact. This calculation is based on an average of well-maintained V10 engines. No one can actually say how long an engine will last. Again, it all depends on how well the vehicle is maintained before AND after you buy it, as well as what you use it for. Remember, a truck that is solely used to run to the grocery store and back will more than likely outlast one that is pulling an RV all over the country!

Is The V10 Productive?

Is the V10 productive, you ask?! Come on, guys! It’s a V10, of course, it is! At 365 horsepower and 460 lb-ft, Ford put this engine through many tests against their Power Stroke diesel engine. While the Power Stroke remained superior for its torque characteristics, the V10’s horsepower was unmatched. The V10 also faired very well against its competition in other ¾-ton to 1-ton gas engines that were much larger in size. The V10 proved to have equal or more power than the Chrysler 8.0L V10 (310 horsepower and 450 lb-ft), as well as the GM 8.1L V8 (340 horsepower and 455 lb-ft).

Most consumers state they are very happy with the performance of their V10s. Many opt for the V10 because they want the power of diesel, but not the noisiness or the smells. Overall chatter gathered on the matter is that this vehicle tows like a breeze! You can tow 4-8k and still maintain proper speeds of 65-80 MPH. There are many forums where people get together and brag about what all their V10 can haul! Man, it seems like you can move a whole house with this thing!

The Pros and Cons of Ford V10

There are many advantages to owning a Ford V10 truck. Just ask anybody that owns one, they swear by this thing! Aside from the fact that will last for hundreds of thousands of miles to come, here are a few.

Price: The Ford F250 cost thousands less than the diesel equivalent. That’s enough to get my attention! If you want the advantages of a diesel engine, at the price of a gas engine, this is a good place to start!

Powerful: With 365 horsepower this thing can most assuredly hold its own!

Gas Powered: Let’s face it, some people just don’t like diesel engines. And that’s okay because Ford has got you covered!

As with all good things, there must be few bad things sprinkled in. So, without further ado here are the cons.

MPG: This engine is a beast, and you must feed the beast! Quite a bit! At 9-10 MPG city, and 12-14 MPG hwy, this is probably the V10s biggest downfall. But surely you weren’t expecting anything less! Just remember what this thing can do! You won’t get this towing power out of a used Chevy S-10, that’s for sure!

Spark Plug Issues: Apparently this thing likes to blow spark plugs, which is more of a headache than anything. It was said that they fixed the issue with the 2005 upgrade.

Exhaust Studs Breaking: Although this can’t be avoided, it said to be a fairly cheap fix. You can find repair kits for around $30.

Well, first and foremost, it’s a V10! That’s awesome in itself! Ford basically just added two cylinders to the 5.4L V8. So, if you’re looking for extreme power, the V10 is where its at! Granted you don’t mind the horrible gas mileage of 10 MPG.

The Ford V10 belongs to the Ford modular family. The modular family has been around since 1991, and they introduced the V10 in 1997. It was originally used for the E-Series vans, as well as motorhomes. The V10 is still in production today for some of Ford’s commercial vehicles, including the Bluebird school bus. As you can see, this engine truly is a beast!

In 1999, Ford decided to use the 6.8L V10, a two-valve unit, in their Super-Duty trucks as a replacement for the aging 7.5L V8. The main idea of the V10 was to bring more power so it could be used as a diesel alternative, at a much lower cost. So, Ford brought all the advantages of a diesel engine into a gas engine. Pretty awesome, I think! The original V10 had 305 horsepower and 420 lb-ft, while the V8 offered only 245 horsepower and 395 lb-ft. So, needless to say, the upgrade was well worth it!

In 2005, an upgraded version of the V10 was brought to life, which was used until 2010. The new and improved version of the V10 was a three-valve unit. The new V10 came with up to 365 horsepower and 460lb-ft. How do you like that for an upgrade?! Are we sure this isn’t a diesel?! Ford has definitely brought the “go big or go home!” mentality into a lot of their work! And we must admit, it works for them!

Owners often report experiencing no problems with their engines up to 200k miles or more. If you have one in your possession and maintain it well, I see no reason why you can’t expect at least 200K miles before any major repairs are needed.

Types of Chevy Trucks: 5 Options to Consider
Is Driving A Pickup Truck Hard?
How Much Does A Pickup Truck Weigh?
6 Different Types Of Ford Trucks - Explore All Your Options
Ford F-150 STX- What Does It Mean? (Answered)
Toyota Tacoma: How Much Horsepower and Torque, Compared to Top Pick Up Trucks?
Truck Customizer: Customize Your Dream Pickup Truck Online (Virtual)
Can You Drive A Pickup Truck For Uber Or Lyft?