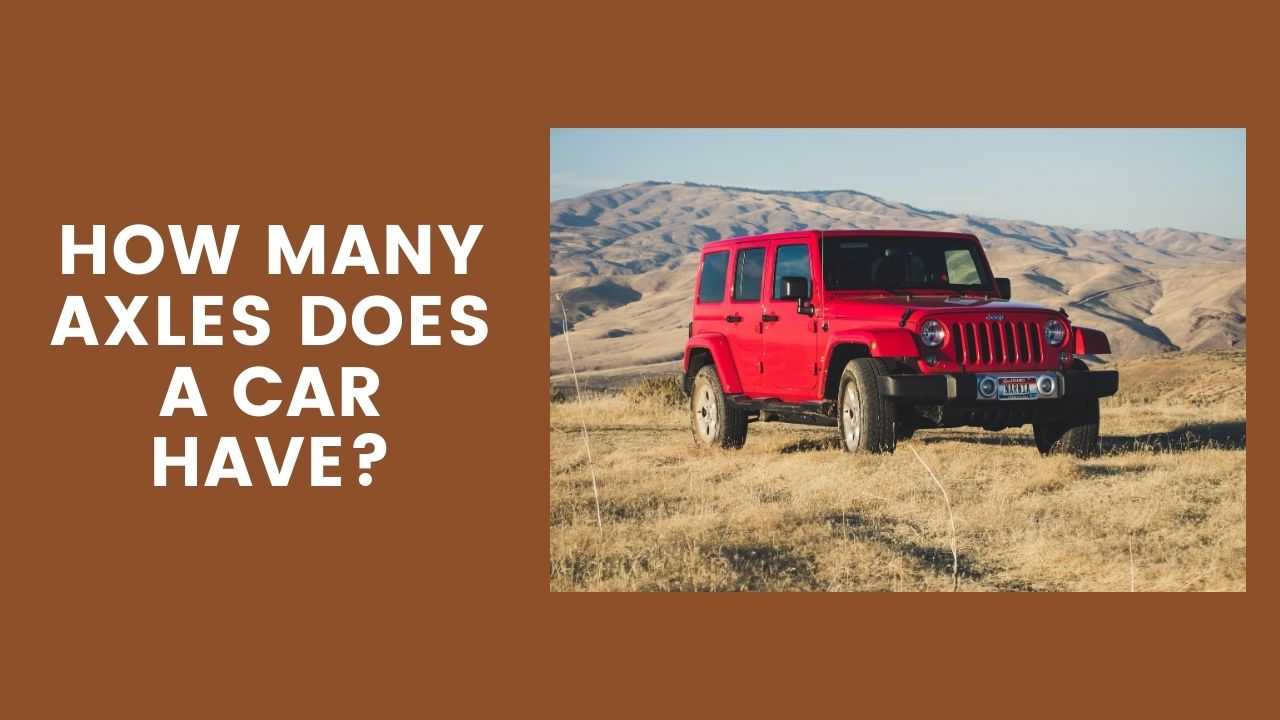 If you’re a gearhead, maybe you’ve wondered how many axles a car has.  The axle is the shaft that connects an opposing set of tires, enabling a car to move from one place to another.  It does this by transferring torque and power from the engine to the vehicle’s wheels, which makes them rotate.

Most cars have two axles.  One axle connects one set of opposing wheels. This means you have an axle that connects the front wheels and one that connects the rear wheels.  While the axle rotates the wheels, it also maintains the position of the tires when the vehicle is in motion.

Other types of passenger vehicles may have more axles. The way to determine the number of axles a vehicle has is to count the pairs of tires.  If you count two pairs of tires, the vehicle more than likely has two axles.  In limousines, there are three pairs of tires and therefore three axles.

There are trucks that have double sets of tires, where the second tire sits next to the first under the truck.  It is in a parallel position to the first tire.  This double set of tires share the same wheel well in addition to the same axle and is defined as a one-axle configuration.

How do axles work?

Power from the engine rotates the driveshaft, which in turn powers the axle and makes the wheels rotate. While the axles are rotating, they are also responsible for maintaining the position of the wheels while the vehicle is in motion.  The axles support the entire weight of the car, including its passengers and cargo.  Additionally, the axle bears the force of braking and accelerating.  The number of axles a vehicle has depends on its type and size. The larger the vehicle, the more axles it has.

Some larger vehicles, like semi-trailers also have something called a “lift axle”.  The lift axle’s purpose is to redistribute the weight of the load over a broader area of the vehicle combination. These axles stay suspended under the truck until they are lowered to help with weight distribution. The lift axle does not engage in propelling the vehicle down the road but does have a braking system that can aid the truck in stopping.

When a truck weighs in at a roadside scale, the amount of weight carried by each axle is measured.  By increasing the number of axles sharing the load, the weight carried by individual axle decreases. This allows the truck to meet weight-imposed limits on certain roads.

These two terms are used interchangeably by the general public, but there is a difference.  While four-wheel-drive vehicles are better suited to driving rough topography and off roads, all-wheel drives are built more for bad weather conditions on city streets.  Snowy winter streets, flooded roads, mud, and sand are just a few of the conditions the all-wheel-drive vehicle is built to handle.

The all-wheel-drive system distributes the engine’s torque separately to all four wheels, sending power to the wheel(s) that need it most.  This provides excellent traction, so when one or two of your wheels are stuck, the other two work to get you out. The all-wheel-drive system stays on all the time and is automatic. This saves you having to guess which if any wheel(s) need more traction at any given time during your drive.

The four-wheel-drive system delivers the same amount of torque to both wheels on the axle. This is not always ideal, especially when turning corners on city streets.  In a car with two-wheel drive, the wheels automatically spin at different rates when turning a corner.  This is normal physics required for a car to effectively round a bend.  In a four-wheel-drive system, however, the wheels spin at the same rate, making cornering difficult.  The way to compensate for this is to switch to a two-wheel drive when driving city streets.  Two-wheel drive allows the tires to spin at different rates when turning, making for much safer maneuvering.

What happens when my axle breaks? Is my car totaled?

No, your car isn’t totaled, but you’ll need to get it to a mechanic right away.  If your axle is failing but not yet broken, you may be able to drive your vehicle, but it is extremely unsafe. If the axle breaks while on the road, you could lose control of the car.  If your axle is already broken, the car won’t move.

A failing axle is characterized by:

In general, axles cannot be repaired; they must be replaced.  Repairing an old axle is not a good idea.  Because of its age, it will not effectively bear the weight and force it’s supposed to.  Once your mechanic starts to work on it, it will take about an hour to replace.

In some cases, the axle may not be the problem.  Axles have Constant Velocity (CV) joints, which transfer torque from the transmission to the wheels at a stable speed.  These joints are packed with grease and sealed in a rubber “boot”. As long as the rubber boot stays intact, the CV joint will operate normally.  When the boot ruptures, however, the CV joint stops operating normally, and the vehicle will exhibit symptoms of a broken axle.

What are examples of two-axle, three-axle, and four-axle vehicles?

Examples of three-axle vehicles include straight trucks, which are trucks 26′ in length or less. Under the category of straight trucks are delivery trucks, waste disposal trucks, and city busses.  These vehicles have one axle in the front and two in the back to carry the extra weight of the cargo.  Greyhound busses, some full-size RVs, and most truck cabs (also called “tractor units”) also fall into this classification.  Two-axle vehicles can combine with the trailer they are pulling to also create a three-axle combination vehicle.  For instance, your two-axle truck pulls a one-axle trailer.  Together, this combination is considered a three-axle vehicle.

Examples of four-axle vehicles are dump trucks, concrete mixers, and tri-drive highway truck cabs. Tri-drive truck cabs are oversized cabs frequently used for hauling oversized semi-trailers. Because these large truck cabs often pull trailers, the axle(s) on the trailer combined with the axles on the cab make up the total sum of axles for that vehicle combination.  For instance, you might have a two-axle cab pulling a 2-axle trailer, or a standard highway tractor with three axles pulling a single axle trailer.

Axle number increases with the size of the truck and trailer.  Large, heavy-duty cabs often have four axles, with one of them being a lift axle.  The trailers they haul often have several axles and can vary in number from two to eleven.

How many axles does an RV have?

An RV has two axles.  Many RVs have a hitch on the back, allowing them to tow passenger vehicles or small trailers. These RVs are called 5th wheels, and the addition of these towable loads increases the total axle count.

Some RVs have a tag axle.  This third axle is located behind the rear drive axle.  The tag axle increases support at the rear of the vehicle, which allows the RV to carry heavier loads.

How many axles does a semi-truck have?

How much does it cost to replace a car axle?

Replacing an axle costs between $170 to $900 or more. Part costs depend on the type of vehicle. Labor runs anywhere between $100 and $200, but some vehicles are more.  Sometimes, it is only a part in the axle (e.g., a CV joint) that has broken.  Your mechanic will be able to tell you more.

Why do car axles break?

There are a few reasons:

A 4 x 4 is simply another name for a four-wheel-drive vehicle.  Four-wheel drives have two axles, both of which are powered by the engine.  This means four powered tires.  By contrast, 4 x 2s have two axles, but only one axle is powered. This means only two powered wheels.

Over a lifetime, the average person will only drive two-axle cars.   If you off-road or live in an area that has consistently bad road conditions, a four-wheel or all-wheel drive will suit your needs.  Just remember that neither of those vehicles gets the gas mileage two-wheel drives do.  If you live in an area that has mild weather conditions and you drive mainly on city streets and freeways, a two-wheel-drive will meet your driving needs.

What Causes Brakes To Lock Up While Driving?
Which Toyota Camry Has Leather Seats?
Best OBD2 Bluetooth
My Car Stalled While Driving – Why, and How Can We Fix This?
What to Do If Someone Parked an RV in Front of Your House
Best Car Freshener
Does Car Engine Oil Expire?
Best Vacuum For Car