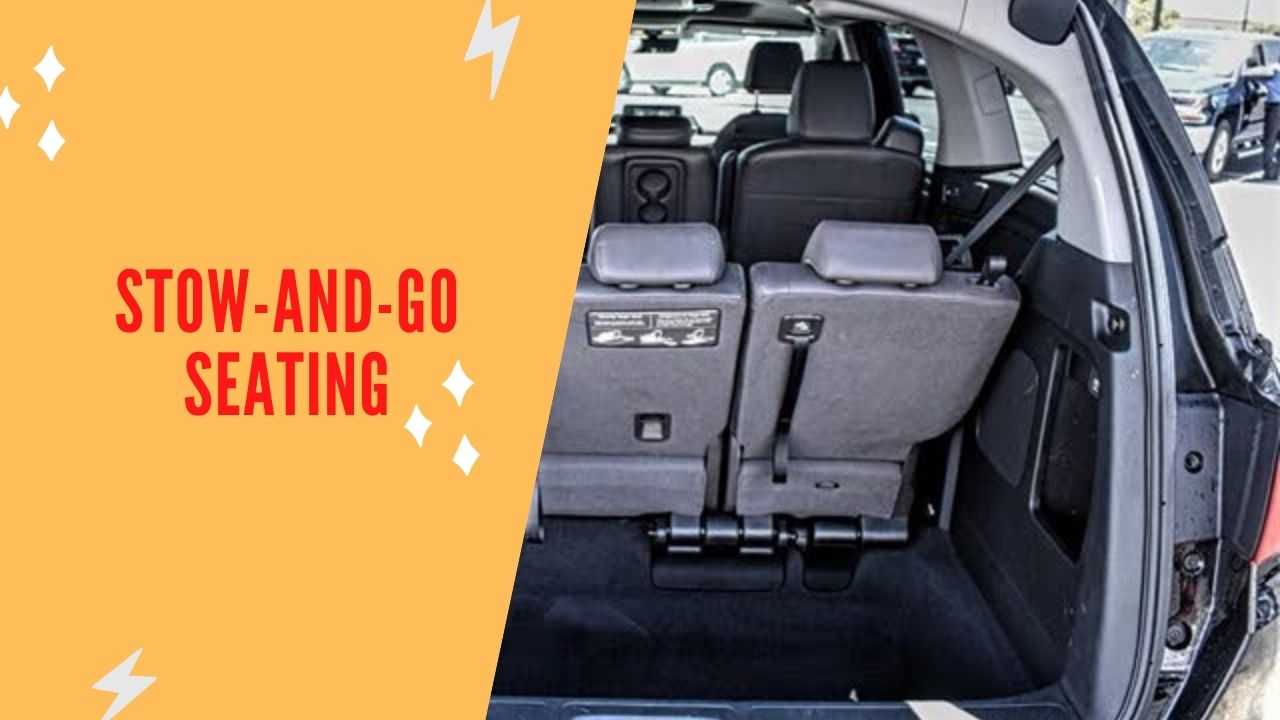 Choosing a new car in and of itself can prove to be a daunting task. Throw in a couple of kids that need to be transported to school and several after-school activities multiple times a week, and it may not be a bad idea to consider driving a minivan the next time you and your spouse go car shopping.

Stow-and-go seating is just one of the many features that ensure you and your family’s travel needs are met anytime you get behind the wheel. We’ll discuss space and seating (as well as countless other features) in various models throughout the article, but here are some of the top vans that offer stow-and-go seating:

We’ll also discuss several other models with similar features to help maximize your search efforts, including:

It’s important to create a distinction between minivans that DO offer stow-and-go, and those that don’t, as it ultimately affects your ability to store objects and equipment and adapt to the road. Let’s dive in.

What is Stow-and-Go Seating?

When it comes to choosing the perfect minivan for your family, there’s a lot to consider. Are there plenty of seats for the kids? What about storing sports or camping equipment? Whatever your needs may be, it’s essential that your next minivan meet all of them.

But what kind of minivan should you be looking for? That’s where stow-and-go seating comes in.

As you can see from the introductory list, the exclusive, limited stow-and-go seating feature is different from minivans that offer a typical slide-n-stow feature, which generally only affect one row and don’t offer a ton of storage space. Stow-and-go allows you to fold down an entire row of seats and stow them beneath the floor, freeing up the entire cargo area without said folded seats taking up unnecessary space.

Choosing the Right Make and Model

There are plenty of minivans out there that offer the stow-and-go seating feature. Choosing the right one that’s best for you and your family may be different from someone else’s, so be sure to test drive different vans to determine the perfect match.

Here’s a list of the minivans that DO offer the stow-and-go seating feature:

Here’s a list of vehicles that do NOT include the stow-and-go seating feature to maximize your search process:

The Ins and Outs of Stow-and-Go

With stow-and-go, you can use the storage area underneath the seats when they’re upright to store whatever you’d like to make sure that there’s plenty of room for your passengers. (This is great for long road trips or holidays!)

The stow-and-go seating feature is perfect for parents who consider themselves to be “on-the-go” and need to update their minivan’s seating arrangements in a pinch. Where other minivans require you to completely take out a row of seats (as we’ve mentioned previously), stow-and-go allows parents to simply update their seats in any school or store parking lot, driveway, or garage.

How Does It Work?

It’s simple: All you need to do is lift the floor panel to rest it against the seatbacks in front of it. Next, simply tug on the stow-and-go strap at the base of the seat. The seat will fold forward, and you’ll continue to push it down into the floor’s storage compartment. Close the floor panel over the covered seats and relish in the extra space!

You may need to consult a video tutorial for this step, as it’s a little harder than simply storing the seats. However, the good news is that minivans with this capability allow you to completely remove the third row of seats, adding plenty of extra space in the back of the van for groceries presents overnight bags and more.

The Pros and Cons of Stow-and-Go Seating

Minivans are typically longer than most cars a family considers buying. As with any major buying decision, it’s important to weigh the pros and cons before deciding on what to purchase. Stow-and-go seating is no different.

Here are some pros:

Here are some cons:

As you can see, the pros outweigh the cons, but the choice is ultimately yours. Be sure to check out plenty of the stow-and-go features when test driving your next minivan to better understand its effectiveness and to see if it’s right for you.

As you can see, choosing the perfect minivan takes some extra thought and effort. Most minivans that offer the stow-and-go seating feature can sit up to seven or eight passengers at a time, making it a great feature for parents who constantly find themselves towing multiple kids around for sporting events, carpools, summer road trips, family holidays, or other various extracurricular activities.

No matter what make or model you decide to go with, make sure you do your research before showing up at the dealership. It’s extremely beneficial to have a list of the kinds of minivans or SUVs you’d like to test drive in order to make the ultimate decision.

We hope this article helps you and your family make the best, most informed decision when it comes to purchasing a new vehicle. Stow-and-go seating is just one of the many benefits of owning a minivan, and we know that no matter what make or model you choose, the memories that happen on your everyday drives will be priceless.