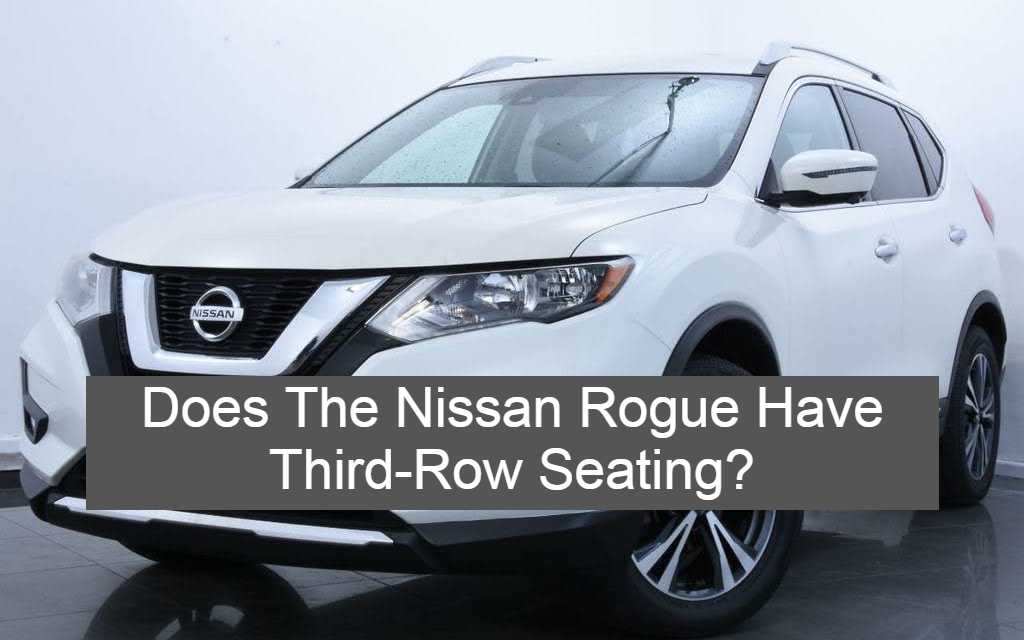 In short, the answer is “Yes” and “No”. While certain models offered third-row seating, others did not. In earlier year models there was an optional upgrade for the extra seating (The Family Package), in the later models this option was eliminated. While it can be frustrating trying to understand their reasoning behind deleting the option, there are most definitely advantages and disadvantages to each answer, in which we will cover here today.

The Nissan Rogue offered an upgrade option for third-row seating (The Family Package) in the 2014, 2015, 2016, and 2017 Rogue models S and SV, but excluding the SL trim and the Hybrid. The third-row seating can hold two passengers and has a 50/50 split. However, the option came with a price-tag, but the cost was not overwhelming by any means. Whereas in the 2018, 2019, and 2020 models the option was discontinued all together.

Nissan decided in later years that it was best to just completely rid the option for the third-row in the Rogue. Whether it be that they realized what was being compromised for this extra seating, or just how compatible it was, or was not, for their consumers when being compared against that of larger SUVs. With that being said, the loss of the third-row may not be such a “bad” thing. Keep reading and decide for yourself!

Is The Third-Row Seating Option Right For You?

The third-row seating upgrade (The Family Package) in the Rogue has a cost of around $1,000. If you compare this to the competition price of larger SUVs this is more than considerably a cheaper option. Now the question is “Do you get the bang for your Buck?”. Depending on your intended use and the size of your family it may not even be worth shelling out that extra cash, but then again, it may be a perfect fit for you.

Keep in mind the Nissan Rogue is already a compact SUV, so adding the third-row is going to downsize the amount of room given for other seating. The second-row seating will have to be pushed forward to make way for the third-row. This also causes a loss of cargo space. With that, you are gaining an extra row of seating, but losing a ton of space.

So the main question you need to ask yourself is “What will your third-row be used for?” and “How much space to do you need for cargo?”. The third-row in this SUV is not very big, only offering 31.4” of maximum legroom, so it would be perfect for a family with smaller children or pets. However, if you have a family like mine, as I have six-foot tall boys, or you intend to travel with five to seven adults and luggage, the Nissan Rogue may not be a good fit for you when it comes to size. So, with all of that in consideration, if you are okay with making the back half a kids-only or a pets-only seating area, and you don’t need to haul additional cargo, the Rogue could be totally fine!

Why Was The Third-Row Seating Option Eliminated Newer Models?

If you’re looking to make regular use of the third-row seating, or any use of the cargo space at all, I personally would suggest a larger SUV. Yes, the cost will be more, but it may be worth it for the level of comfort alone. Again, if you only intend to use this a small-child or pet hauler it could be the perfect match for you!

Which Other SUVs Come With Third-Row Seating Option?

These are the top 10 SUVs with third-row seating:

Coming in at #10 on the list the Honda Pilot has an average cost of $31,450 and third-row legroom of 31.9 inches. Depending on the model you choose it can seat seven to eight people.

In at #8 on the list the Land Rover Discovery has an average cost of $54,795 and third-row legroom of 33.5 inches. Seats seven people.

Landing at #7 on the list the Enclave has an average price of $40,000 and third-row legroom of 33.5 inches. Seats seven people.

In at #6 on the list the Chevrolet Traverse has an average cost of $29,930 and third-row legroom of 33.5 inches. Seats up to eight people.

In at #3 on the list the Chevrolet Suburban has an average cost of $50,800 and legroom of 34.5 inches. Seats seven to nine people.

Landing the #1 spot on the list the Ford Expedition Max has an average cost of $52,130 and legroom of 36.1 inches. Seats eight people.

Is The Nissan Rogue With Third-Row Seating Right For You? Pros and Cons.

The Nissan Rogue is quite stylish for its price, but the consumer reviews seem to be a mixed bag. Some say the third-row seating is too small, useless, and wasted space, as well as a waste of money for the upgrade. While others seem to think it’s very efficient and affordable for an SUV.

With all of this being said, you just have to decide if the Nissan Rogue is the right SUV for you. Will it meet your needs and demands? Is it big enough for you and your family? If so, then go for it!

Second, there’s the age-old saying “If something seems too good to be true, it probably is!”. That’s my thought on the Nissan Rogue. Yes, you get an added row of seating but it really can’t be used for much more than small children. If, and I do mean if, you can fit an adult back there it will not be a very comfortable ride for them! Adding to that is the loss of cargo space, which does not work well for me, considering my love of travelling. So, Nissan, just because you could fit an extra row of seating back there, it doesn’t mean you should have!

Does The Toyota RAV4 Have Third Row Seating?
Does the Jeep Grand Cherokee Have a Third Row?
How Much Can A Jeep Wrangler Tow? [Payload / Towing Capacity]
What Are The Common Problems With Jeep Grand Cherokee?
Is Chevy Equinox an All-Wheel-Drive? Why It Matters
Where Is The Nissan Rogue Made?
Can You Tow With a Honda CR-V?
Where is the Ford Escape Made?