Understanding what a no zone is, and how to avoid it on the road is important for driver’s safety. Driver’s should be aware of their own vehicle’s no zone, as well as making sure not to drive in someone else’s. The Federal Motor Carrier Safety Administration suggests the average semi-truck weighs 80,000 pounds. This compared to the 4,000 pounds the average car weighs means when accidents occur it can be devastating. To learn more about the no zone, and how to avoid it, continue reading, What is a No Zone in Driving? 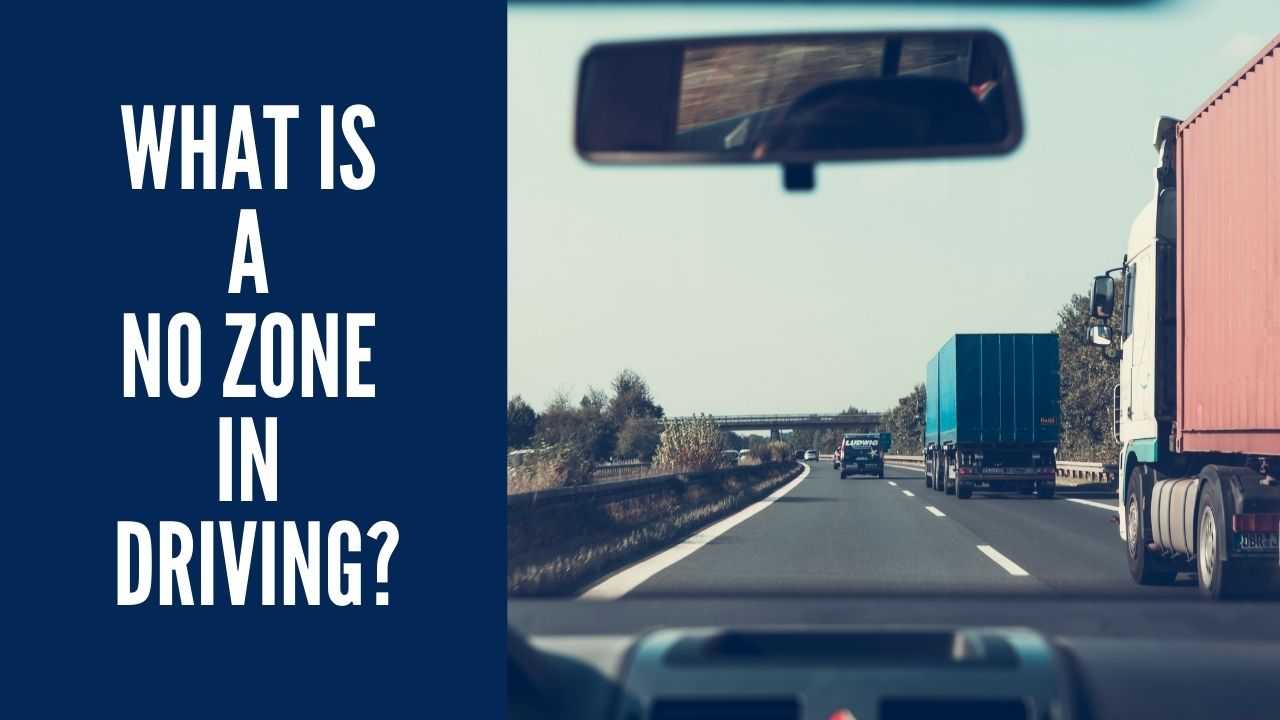 Being aware of the no zone can help you drive confidently on the road. Continue reading to learn more about how to avoid a no zone, and what the difference is between the no zone and the better-known blind spot of a car.

No Zone, What is it, Where is it and How to Avoid it?

It is important to understand what a no zone is before you hit the road. Avoiding the no zone, and driving with caution, may help you evade a collision.

What Is A No Zone?

A “no zone” is another name for a truck’s blind spots. These are spots around the truck that the truck driver cannot see surrounding cars. Drivers should try to avoid driving in a truck’s no zone to avoid a collision. When a car is so close to a truck that they could not stop or swerve to avoid a crash, this is also considered a no zone.

What Are the Different Types of No Zones?

Drivers should learn what types of no zones exist before hitting the road. No zones are present surrounding certain large vehicles. Understanding what vehicles may have a no zone, and where these no zones are located can help you stay safe on the road. Here is everything you need to know about large vehicle no zones.

1. Types of Vehicles with No Zones

As a general rule, most large vehicles have no zones. This includes, semi-trucks, trailers, tractor-trailers, buses, and RV’s. Extra large vans may also have no zones, and so might heavy equipment, such as farming equipment.

2. The Front No Zone

The front no zone is located directly in front of the vehicle. The elevated height of the driver creates this blind spot. When a car cuts a large vehicle off, the large vehicle driver may not be able to see the car if it is driving to close to their front bumper. Make sure you have plenty of clearance before cutting in front of a semi-truck, or other large vehicle. As a rule of thumb keep at least two car lengths between you and a large vehicle.

The back no zone is the area behind a large vehicle where the driver cannot see cars. If you are within 200 feet of a large vehicle’s back side, your car may not be visible to the driver in front of you. This includes visibility in the mirrors, and when the driver looks over their shoulder. Practice the three second rule when following a large vehicle, by keeping at least three seconds between you.

Both sides have a no zone; however, the left-side is the smaller than the right-side. When passing a large vehicle, you should always pass on the left-hand side. The large vehicle driver will lose visibility of your car from around the hitch to the front of the truck.

The right-side no zone is larger, and more dangerous than the left-side. Drivers should avoid passing a large vehicle on the right-side, which should be easy because the right lane is not supposed to be used for passing. If you are driving on the right-hand side of a large vehicle the driver will not be able to see you two car lengths behind their back bumper, and until you are parallel with the driver’s seat.

Knowing the no zones can help you avoid an accident on the road. Accidents between large vehicles and cars can be much more dangerous, especially at elevated speeds, such as on the highway.

What Are the Safety Tips for Avoiding the No Zones?

Safety is a primary concern when you hit the road. Following these tips can help you avoid the no zone and stay safe on the road.

How to Tell If You Are in A No Zone

Check their mirror: When passing a semi-truck look at their mirror. When you can’t see the drivers face, the driver can’t see your car. This trick works for semi-trucks, and can be applied to other types of large vehicle’s too, but may not be as accurate.

Study the no zones: Studying the no zones in advance can help you be aware of them on the road.

Why Are the No Zones Dangerous?

The no zones can cause very serious car accidents, because large vehicles significantly outweigh the average car. Accidents involving large vehicles are more likely to occur when a car is driving in the no zone, because the large vehicle driver cannot see the car. Here are some of the most common questions asked about safety and the no zones.

Why is tailgating a semi-truck dangerous?

Why is cutting in front of a semi-truck dangerous?

Similar to tailgating a semi-truck, large vehicles cannot maneuver and suddenly stop as effectively as cars can. If you cut a semi-truck off, or drive closely to their front bumper the truck driver cannot see you. If a semi-truck rear ends your car it will be worse than a car rear ending you, because a semi-truck weighs on average 80,000 pounds.

When is it safe to pass a semi-truck, or other large vehicle?

It is never entirely safe to pass a semi-truck, or other large vehicle. Semi-trucks have limited visibility on both sides, and are slow to maneuver. If you need to pass a large vehicle on the road use the left lane, and make sure you maintain a consistent speed. If you are merging onto the highway, find a gap in traffic. Do not expect a semi-truck to be able to change lanes so you can merge.

What is the Difference Between a No Zone of a Truck and a Blind spot of a Car?

Most people are familiar with the term, blind spot. A blind spot is the areas around a car that can’t be seen by the driver. This is very similar to a no zone, which is the term that essential describes a large vehicle’s blind spots. There are a few distinguishing features that a driver should be aware of on the road.

– The no zones of a truck are much bigger than a car’s blind spots.

– A truck has four no zones including, the right-hand side, left-hand side, directly in front of the truck, and right behind the truck.

– Some no zones cannot be checked by looking over the truck driver’s shoulder, including the right-hand no zone, in front of the truck, and behind the truck. Truck drivers will only have limited visibility when looking over their shoulder on the left-hand side.

– Semi-trucks on average are 75 feet long, which means little visibility.

– Semi-trucks cannot always maneuver to avoid a collision. Area’s that a semi-truck cannot maneuver away from are considered no zones.

– The blind spots of a car are smaller than a truck’s no zones.

– A car’s driver can check their blind spots by looking over their shoulder to view both the left and right-hand side’s.

– The average car is 14.7 feet long, which allows for more visibility.

– Cars have a less limited view, and are able to maneuver faster than trucks to avoid a collision.

Does Every Vehicle Have a No Zone?

Every vehicle has places around it where the driver’s view is obstructed; however, some vehicles have more significant limitations than others. Large vehicle’s have the most limitation to their visibility. The area surrounding a car were the driver cannot see is referred to as a blind spot. These blind spots around a large vehicle are referred to as no zones, because they are larger than a car’s blind spots. Here is an explanation of what the no zone looks like around different types of vehicles.

Cars and small vehicle’s: Cars are not considered to have no zones; however, they do have blind spots on their left and right sides. Visibility in front of a car, and behind a car is usually fine. Car’s have the best view compared to all other vehicles on the road.

Semi-trucks: 18-wheeler semi-trucks have the largest no zones. When you hear the term, “no zone” it is often referring to a semi-truck. Semi-truck’s view is limited on all four sides. Driver’s should stay at least three car paces away from a semi-truck unless passing. When passing a semi-truck, drivers should use the left-hand lane and pass at a consistent speed.

Farm equipment: Large farm equipment operate very slowly. Before passing farm equipment on the road, remember the driver has limited visibility on both sides, and behind the vehicle. This would be considered the no zones.

Buses: Similar to semi-trucks, buses have no zones on every side of the vehicle. A bus has better visibility than a semi-truck in front and behind, because they sit lower, and have windows to do over the shoulder checks.

The “no zone” is a term used to describe the blind spot of a large vehicle, which is significantly more limited than a car. Semi-trucks have the worst no zones, with little visibility on both sides, in front, and behind. Driver’s should use caution when driving around a large vehicle, making sure not to drive to close. Accidents that occur between a car and a semi-truck are more dangerous, and often deadly. Be aware of where the no zones are, and how to avoid them before hitting the road. If you are passionate about safety on the road, please leave a comment below.

Best Car Leather Cleaner
Best Winch (for Trucks, SUV’s, UTV’s and ATV’s)
Best Off-road Tires
Best AUX Cable
What Common Issues Cause Your Car To Fail an Inspection
Best Oil Filter
Best Parking Sensors
Knocking Noise Under My Car When Driving: What Could It Be?