Whether you’re looking for a sporty upgrade or something to suit a growing family, the RAV4 may be at the top of your list for crossover vehicles. This leads many to people ask, does the RAV4 have a third row? 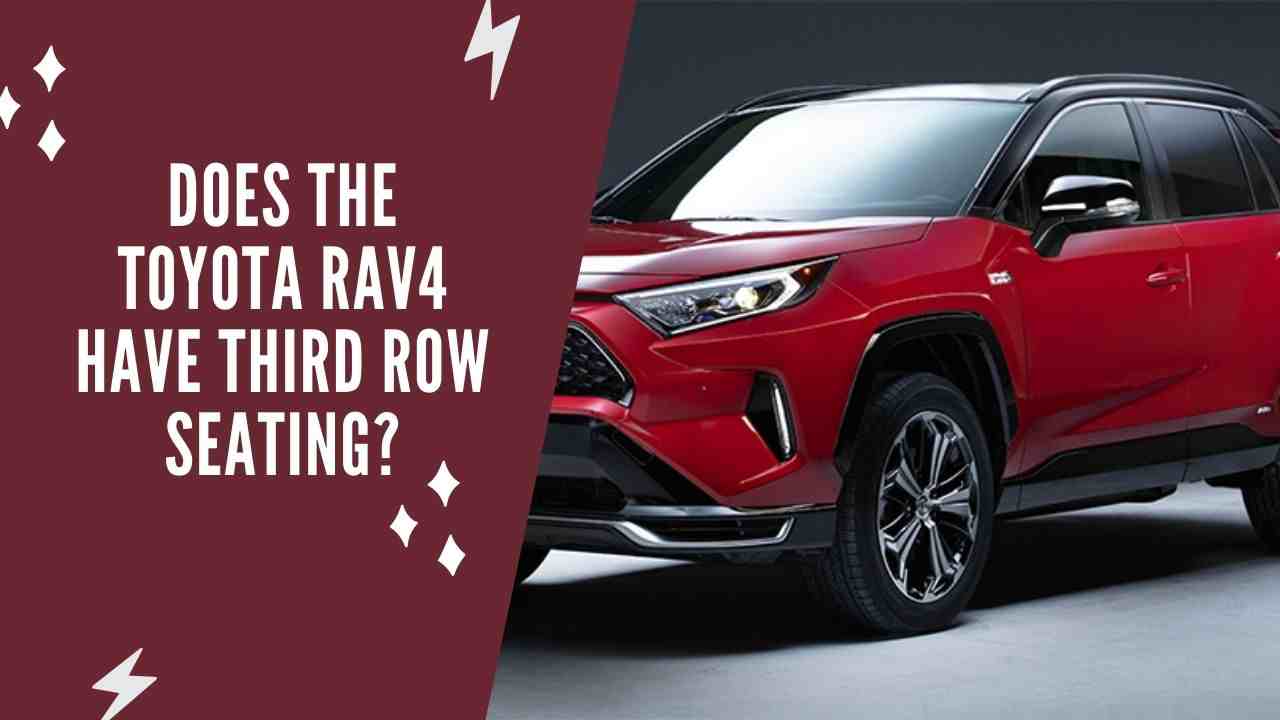 Unfortunately, the latest RAV4 models do not come with third-row seating. However, you may have some options. RAV4’s made between 2005 and 2012 do have third row availability. And although they can be slightly more difficult to find, they can be found. Whether you need a third row at all will be an important thing to consider as well.

Is a RAV4 with 3rd row seating right for you? Read on to find out more about availability, need, and your options when it comes to purchasing a RAV4.

The newest RAV4’s do not come with a choice for third row seating. This is due in part to Toyota’s range of SUV’s which gives car buyers a good spread of options when it comes to vehicles with more storage space and seating capacity.

Used and Pre-Owned RAV4 cars with third row seating were made between 2005 and 2012. After offering the option for some time, Toyota decided they would no longer offer the option of adding this feature to the popular SUV.

Not so easy to come by: Although the 2005 to 2012 models of the RAV4 boast 7-seater capacity, they are not that easy to come by. Car buyers who picked up a RAV4 during this period would have had the option of adding a third row but that doesn’t mean they did. Many buyers maintained the integrity of the RAV4’s small SUV footprint and didn’t take the optional third row. For this reason, it can be slightly more difficult to find them in the secondhand market. It is important to note that as you shop on used car sites, be sure to ask if the third row is present in the pre-owned vehicle.

As an example, let’s take the 2006 RAV4: In 2006, Toyota’s redesign of its now easily recognizable sport utility gave car buyers a vehicle with a more attractive exterior, increased interior space, and the option for a powerful V6 engine. The manageable and practical size made the SUV a popular choice for both suburban and urban car users. In addition to 4 more inches of legroom in the second row, the extra eight cubic feet of space in the back could be used to house more luggage and/or a child-friendly third row. The car, known in its time for its small size was no longer so mini anymore.

Why Did Toyota Stop Making RAV4’s With Optional 7 Passenger Seating?

When asked about why the RAV4 isn’t seeking to provide more passenger capacity in its latest models, the Toyota North America Group Vice President simply states, “I think RAV4 in its compactness holds a certain space.”

One of the most popular compact SUVs on the market: Toyota stopped offering the option of a 3rd row in its fourth generation of the vehicle (2013 – 2018). They wanted to maintain its “small” size in the marketplace and decided to drop the optional 7 passenger seating, as well as other features such as the V6 engine and the side-opening rear door. Since its first iteration in 1996, the RAV4 has maintained a high ranking among compact SUVs for its price, safety, and of course, its size.

Options test the market: When the optional third row was available with the third generation of the RAV4, it turned out to be less coveted than expected. Many cars buyers did not opt for the greater passenger capacity and therefore, Toyota decided to maintain the RAV4’s unique place in the SUV market.

Availability of larger SUVs under the Toyota brand With the Toyota auto company reaching 88 years in car production, there is no shortage of models to suit consumer needs. The demand for RAV4s with enhanced third row seating is not as desirable as the company thought it might be and with choices like the Sequoia, Land Cruiser, and Highlander series, Toyota’s move to maintain the RAV4 as its star compact SUV, seems to be the right one.

How Many Passengers Does A RAV4 Comfortably Seat?

Comfort: The RAV4 was built to accommodate 5 passengers. The comfort level of the vehicle at full capacity will differ for different people, most notably children vs. adults. How much you are carrying in the car with you at any given time will also determine the comfort to capacity ratio.

The older ’05 to ’12 models: The RAV4’s available on the market that do have a third row will seat up to seven passengers but not eight. The reason for this is that although the third row is a full row, it has a very narrow middle seat that is not adequate for an adult passenger. Additionally, if you are transporting gear as well as passengers, the RAV4 with third row seating may be a tight fit for your needs.

Comfort is important but understanding your specific needs for an SUV will help determine whether or not you should invest in a RAV4 with third row seating.

Does It Make Sense To Buy A Older RAV4 With A 3rd ROW?

As mentioned, the RAV4’s that offer 7 passenger capacity will be older models that may be slightly harder to find. But there are some benefits for those who love the brand. Here’s what some consumers think about the RAV4 that offer a third row.

Pros There are car enthusiasts out there who swear by the RAV4. Furthermore, car owners who rave about the RAV, said that the third row RAV4 vehicle has firmer rear springs and a higher payload, in addition to other structural perks. Albeit more difficult to hunt down and potentially priced at a higher MSRP, those who are fans of the 2005 to 2012 RAV4 models are willing to do the work and pay the price.

Cons On the other side of the coin, the idea of seating full-sized adults into the third row of a RAV4 is simply nonsensical. While it might be sufficient for school-aged children, the space available will not provide comfort for adults sitting in the third row. Additionally, if you need a third row for transporting young children who need to use a car seat, you may want to rethink owning a RAV4 with available third-row seating.

Alternatives To The RAV4 That Offer 3rd Row Seating

As the number one biggest carmaker in the world, Toyota crushes the market when it comes to variety and choice. If you are looking for a vehicle that offers third row seating here are some of the best Toyota options on the market.

Toyota 4Runners: If you are looking for something similar to a RAV4 that has third-row seating that’s comfortable for everyone, the 4Runner would be a good option to consider. Customizing your 4Runner to include the third row will allow for an eight-passenger vehicle with all-terrain styling and rugged durability.

Toyota Sequoia: Toyota Sequoias are a great choice if you are looking for a car with full capabilities and features such as four-wheel drive and V8 engines. This vehicle is pricer than the 4Runner and Highlander but fits the bill when it comes to more space and more power.

Toyota Land Cruisers: If you are considering a higher-end Toyota SUV, the Land Cruiser is touted as the most spacious of the bunch. The high-performance Land Cruiser has features that support the price and if you are looking for comfort for a maximum number of passengers, this may be the right choice for you.

If you simply love the RAV4 but need a third row to support extra seating capacity, your choices may be limited but they exist, you’ll just have to do some digging.