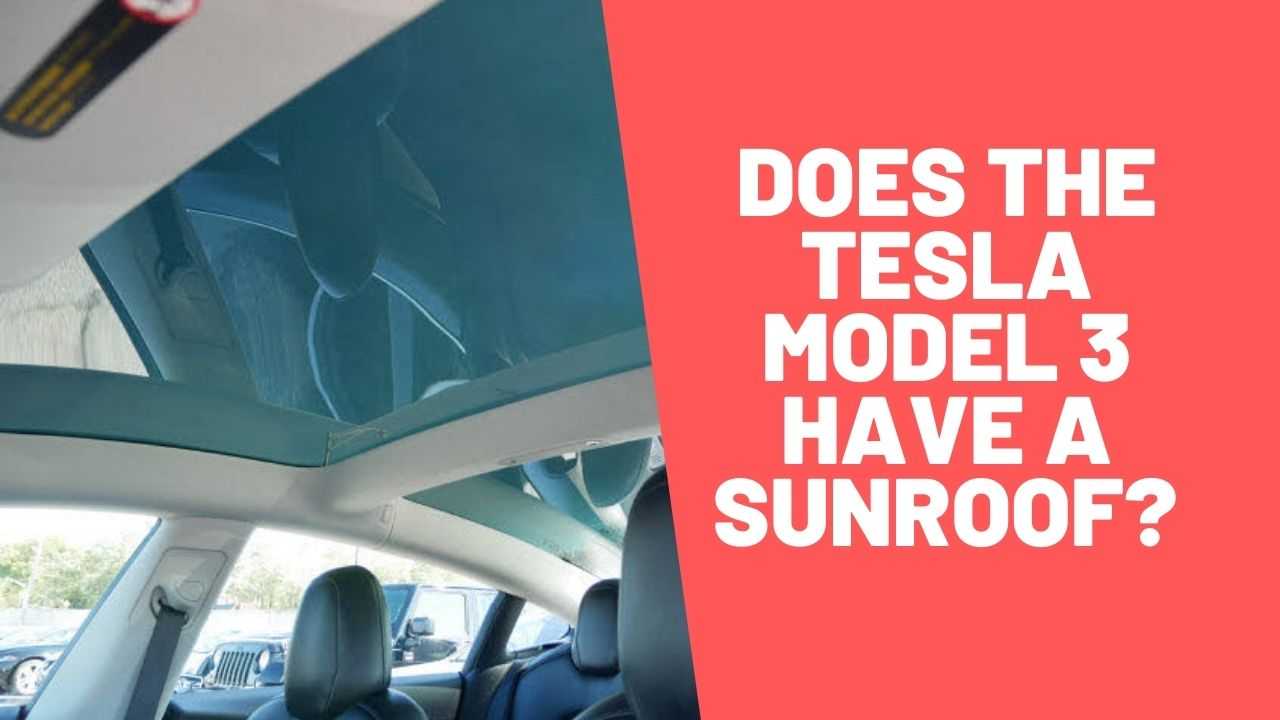 Tesla Model 3, the California car company’s executive compact competitor, has earned rave reviews from car enthusiasts across the spectrum. Officially rolling off the assembly line in mid-2017, the Model 3 has quickly become the best selling electric car in the world with over 300,000 vehicles sold. Prized by drivers for not only its low impact environmental efficiency but for its minimalist design, the Apple-esque Tesla retains nearly all of a conventional vehicle’s options— and more. But does the Model 3 come with a sunroof?

Tesla Model 3 does not have a sunroof, nor can one be fitted at the factory or elsewhere. What it does have, though, is arguably even cooler. While from a short distance it would appear that Model 3 has one single pane of glass sweeping from the windshield to the trunk, which isn’t quite right. The Model 3 makes use of separate panels, two over the cabin, which is polarized and tinted to offer both ultraviolet and infrared protection.

From inside, it’s easier to see that the glass roof is separated by a high strength steel cross member that runs from b-pillar to b-pillar. This bar houses the dome lights and increases structural rigidity and protection. These glass panels, two layers of laminated glass, allowing ambient light to fill the cabin while fending off harmful UV rays.

Tesla had made a name for itself starting with the Tesla Roadster, the small but mighty Lotus lookalike, and then went even further with the groundbreaking Model S. Following those came the Model X: Tesla’s first foray into the SUV segment. This gull-winged luxury SUV features all-wheel drive and a stunning seamless glass windshield that flows from behind the front seats down to the dash.

Ahead of the Model 3’s release in mid-2017, there was a flurry of rumors surrounding this new addition to Tesla’s lineup. One popular report was that of a full glass roof. It was originally believed that this glass roof would be a costly option but would be a standard feature on premium versions. However after the pricier premium models were delivered (with glass roofs), Tesla got to work on the standard ($35,000+) versions. These base models, which had originally been slated to have only a partially glass roof (above the rear passengers) now would be handed over to their new owners with the tinted all-glass roof as standard, at no extra cost.

There was no official reason given from Tesla for this switch from partial to full glass; some buyers assumed that it may have to do with machine retooling costs but most were just happy to get in on the action.

It would be an understandable assumption that, because the Tesla Model 3 lacks a conventional solid roof, it would be inherently more dangerous and lack the torsional rigidity of a vehicle with a solid roof— luckily this isn’t the case.

Tesla uses strategically positioned high strength steel in the Model 3’s vehicular structure. One section of the vehicle that utilizes this is the steel bar that spans the width of the car behind the front seats. So while the roof in the Model 3 is mostly glass, that central bar has an invaluable job when it comes to safety.

In a test by the IIHS, the Insurance Institute for Highway Safety awarded the Model 3 their highest marks for roof safety, with the Tesla having the highest strength-to-weight ratio of any electric vehicle ever tested. In fact, the Model 3 is able to withstand in excess of 20,000lbs of force on its roof— that’s equal to more than a stack of five Model 3s!

Rollovers aren’t much of a concern either. The glass panels are a two-layer laminate of hardened glass, held together with thermoplastic. In the event that something were to strike the glass, it would react the same way most windshields do: without shattering. According to the NHTSA, the Model 3 only has a 6.6% chance of a rollover in a severe crash. This is largely due to the car’s low mounted battery pack (beneath the floor), allowing it to carry its weight much lower to the ground than conventional vehicles.

Overall, the IIHS awarded the Model 3 top marks and even named it a Top Safety Pick+.

With conventional vehicular safety understood, many prospective buyers and new owners are curious about the damaging power of the sun’s rays. Buyers are concerned, not only about the car’s interior but for the well-being of passengers themselves.

Again, these concerns are not unfounded— split dashes and sun-bleached, cracked seats are a common sight on many older convertibles.

Tesla, however, has made some smart accommodations to account for these solar shortcomings.

The glass panels making up the roof are tinted darker than the passenger windows, helping to greatly mitigate the felt heat from direct sunlight. This is assisted further by having the glass roof panels polarized to reject UV rays and infrared light.

Tesla was also clever enough to include a feature called ‘cabin overheat protection’. This feature automatically turns on the car’s ventilation when the internal temperature reaches a certain degree.

While you might miss the versatility of a conventional sunroof and its ability to open and let in the fresh air, what you won’t miss are the issues that can often accompany one.

There are a plethora of problems that can arise with sunroofs that are simply a nonissue with Tesla. A sunroof can come off its track and need to be realigned; its seals can dry out and allow water to leak into the cabin, or the motor could just quit working altogether— replacing a sunroof can cost hundreds of dollars. And while these problems can crop up with just about any sunroof, these aren’t anything you’ll need to worry about with a Tesla Model 3.

One interesting detail some owners have noticed though is a reddish hue that the glass roof can take on in misty conditions. This Mars-like appearance is most likely caused by the water droplets refracting the light and displaying the sun-deflecting coating.

A Brief History of the Sunroof

The first automobiles were closer in style to horse-drawn carriages than to what we now consider a car, but those open-air designs quickly changed as the automotive industry began to boom. By the time cars evolved into what we know today, they had gone through various stages of roofing: from the ‘coupé de ville’ style (covered passenger cabin, open driver) to the ‘landaulet’ (covered driver, opened passenger cabin).

There are so many appellations in regard to roof glass that it’s easy to get confused. We can break down a bit of the nomenclature so it’s easier to understand.

Sunroof: Colloquially used to describe all manner of roof openings, the term ‘sunroof’ is technically used to describe a panel that can move to expose sunlight and/or fresh air. It can either be moved manually by a crank, electrically by a button and motor or removed completely and set aside as a whole panel.

Moonroof: Historically, the term ‘moonroof’ was used to describe a fixed transparent pane of glass. Today, ‘moonroof’ and ‘sunroof’ are used just about interchangeably. A moonroof is still a pane of glass, but one that can articulate like a sunroof.

Panoramic Roof: a ‘panoramic roof’ is the term used to describe a large expanse of glass that generally spans the majority of the vehicle’s roof. Panoramic roofs generally have a large section that can open and allow fresh air inside the cabin.

Can I get a sunburn through the glass roof?

Thanks to Model 3’s UV resistant glass coating and polarization, you run a very low risk of getting a sunburn inside a Tesla. In fact, thanks to the Model 3’s ‘cabin overheat protection’, you wouldn’t even need to worry about overheating!

Is the glass roof bulletproof?

If someone is sniping at you from outside your Tesla Model 3 your glass roof is going to provide minimal protection. Even though the glass roof is double pane laminated glass, it will not protect you from ne’er do wells.

Is the glass roof heated?

The glass roof is not heated. If you’re concerned about leakage or snow removal— don’t be. The glass is firmly sealed into the top of the car. And as far as snow goes, the ambient heat from the heater and cabin warmth will melt the snow in no time.

When it comes to hail, your glass roof will have about the same level of ruggedness as your windshield. As far as hail goes, you’d probably have to worry more about your aluminum body panels before your glass roof.

How much does it cost to replace the glass roof on model 3?

If for some reason you need to replace your glass roof, you can expect to spend anywhere from $1,000 and up. Luckily, there are whole companies now that specialize in parting out Teslas, so you may be able to get one secondhand!

Can I still mount a roof rack on my Tesla Model 3?

You sure can! The Model 3, despite having a massive glass roof, still retains mounting points for roof racks that can be purchased aftermarket or direct from Tesla itself.

While it could be said that the Tesla Model 3 is ‘lacking’ when it comes to open-top features, it helps to keep in mind that this electric car is one of the safest on the road. What the Model 3 may lack in variability, it more than makes up for it in style and safety. The Tesla Model 3 affords its passengers an uncompromising view of the sky while also offering protection in spades.

Best Garage Parking Aid
How to Push Start a Car, With or Without an Engine-Start Button
What Is The Tow/Haul Button? How to Use Tow/Haul Mode
Best Car Wash Soap
What Common Issues Cause Your Car To Fail an Inspection
Best Car Speakers
What Are the Gauges in a Car?
What to Do If Someone Parked an RV in Front of Your House