Depending on your wants and needs for your pick-up truck, horsepower and torque are both areas that are worth considering when it comes to selecting the right truck for the job. There are different levels of horsepower, along with different torques, that are more useful for various jobs. 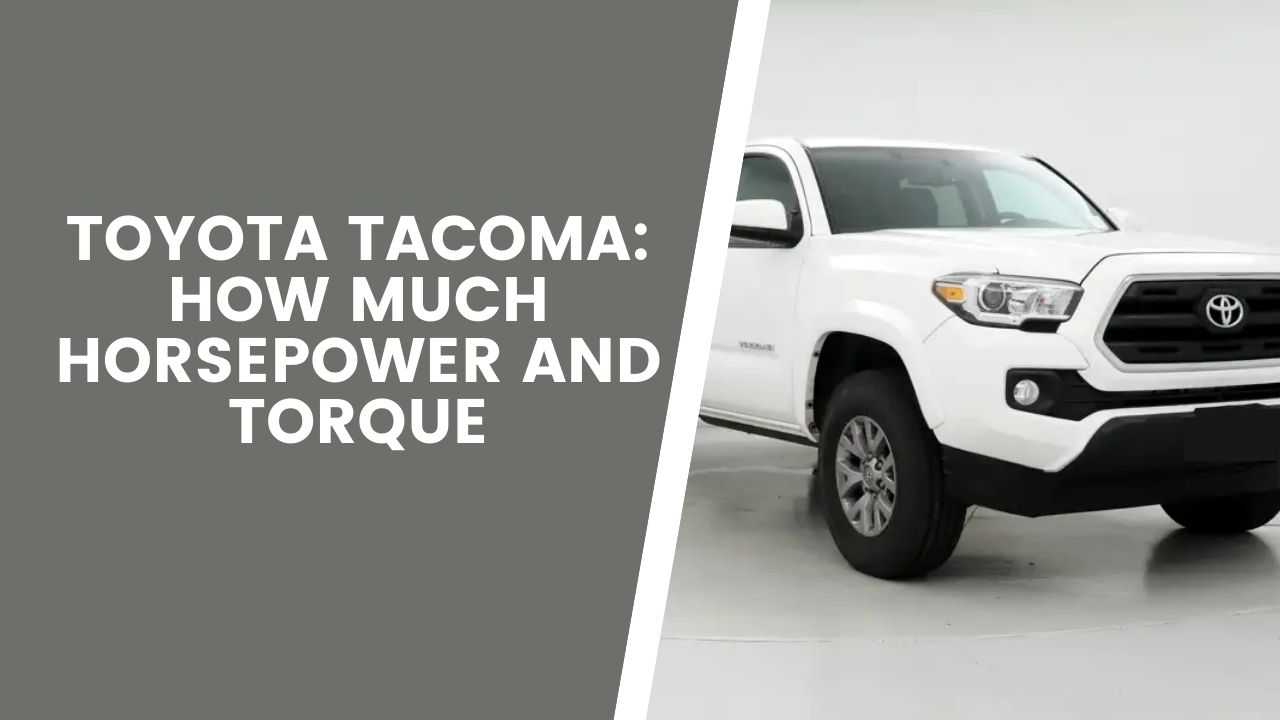 Now that we know that the Toyota Tacoma possess different horsepower and torque units, let’s look into what all this pick-up truck can do, based on each unique specification.

What Is Horsepower? How Does It Affect the Performance?

It’s fascinating to learn where common words came from, and how they came to be.

The History behind the Term: During the Industrial Revolution, a man named James Watt studied steam engines and needed to find a way to calculate their energy output. In those days, draft horses were commonly used for hard labor, so Watt ended up coining a unit of measurement that equated the power of the draft horse. Hench, the term “horsepower” came to be.

How Horsepower Affects Your Car: Now that we know the history and science behind it, how does it affect your vehicle? Basically, horsepower is used in conjunction with the RPM (revolutions per minute) to help your vehicle increase fuel usage, accelerate more quickly, and tow more weight. There is always more to it of course, but for simplicity’s sake this is the basic concept behind horsepower.

What Is Torque? How Does It Affect the Performance?

The Basics behind Torque: While horsepower is used to describe the power output, torque is used to describe a vehicle’s “turning power”. Think of it like when you turn a wrench. It is the measure of force that causes something to rotate on an axis, even if the axis is not visible or concrete. The more torque a vehicle has, the greater the ability to do work. Torque helps the vehicle accelerate, so the more torque the vehicle has the faster it is able to go in a shorter amount of time! The part of the internal combustion engine that produces torque is what is called the “crankshift” – typically this amount will read higher than the number read at the wheels.

Towing Capabilities: Torque also helps with towing capacities, and not just additional weight. SUVs and trucks need more torque because they are heavier in nature. Also worth noting, diesel vehicles and those with V-configurations will have more torque, because again they tend to be in the vehicles that do more heavy lifting.

Teamwork Makes the Dream Work: Torque and horsepower work together to keep the engine from overexerting itself. When a vehicle is able to exhibit its maximum torque capacity, the engine doesn’t have to work as hard to maintain power.

The Toyota Tacoma has always been an outstanding example of a good truck, and a lot of it has to do with the engine designs. Throughout its life, the Tacoma has had three different engine sizes. We will break down each engine size, along with its correlating horsepower and torques:

2.7L 4- Cylinder: This “tiny but mighty” engine option has a stout but fuel-efficient build. Don’t let its small build fool you; this engine has been able to hold its own both on and off the road very well.

3.5L V6: This is the largest engine build for the Tacoma, as of 2016. Even though it’s considered a smaller mechanism, this engine is able to produce a larger output than in the 2.7L 4-Cylinder.

4.0L V6: This is the largest of all Toyota Tacoma engine sizes. Customers tend to like this one the best, as the larger size enables more performance and weight towing capabilities. This is a great option for both on and off road adventures.

Perhaps you’re wondering what other trucks or SUVs are available that have similar, or maybe even better, horsepower and torque capabilities. Below are some of the top 5 competitors for the Toyota Tacoma:

Nissan Frontier: This truck comes with an impressive horsepower of 310 at 6400 RPM.

GMC Canyon: Here is another impressive alternative, with an operating horsepower of 308 at 6800 RPM.

Ford Ranger: Newer models tend to have a typical horsepower of 270 at 5500 RPM.

As you can see, there are quite a few competitors for the Toyota Tacoma when it comes to horsepower. Now let’s talk about the different torques in the leading competitors.

It’s pretty interesting to see what all the horsepower specs are in Toyota Tacoma competitors. But how does the different torques hold up? Let’s take the same 5 competitors, only now let’s focus on the varying torque capabilities and see how they rank:

Nissan Frontier: This vehicle holds a steady place among competitors, operating at a torque of 281 lb/ft.

Jeep Gladiator: While Jeeps isn’t known for their pick-ups, this diesel is the third build of its kind, with an impressive torque of 442 at 1,400 RPM.

Chevy Colorado: Considered a classic in the car industry, this truck has a maximum torque of 275 lb/ft at 4,000 PRM.

GMC Canyon: Coming in at the lowest operating level, newer models of this truck can have a torque of 191 lb/ft at 4,400 RPM.

Ford Ranger: Another classic, this truck has been able to hold the line at a torque of 310 lb/ft.

Engine Options: As we discussed earlier on in the article, the Toyota Tacoma has a history of 3 different engine options. The latest models come with a 2.7L, which takes regular unleaded gasoline.

Acceleration: Newer trucks are able to accelerate quite well, thanks to its torque of 180 lbs/ft at 3,800 RPM. This will prove helpful in times where quick acceleration is necessary.

Transmission: Newer models are built with a 6-speed automatic transmission. Overdrive is also an option with this transmission. There are no manual transmission Toyota Tacoma models to note.

Drivetrain: This truck is a rear-wheel drive (RWD) vehicle. This is important to know if you plan to tow it behind an RV, as some vehicles needs special accessories to tow a RWD vehicle.

MPG: Because these trucks are designed to haul more loads, typical miles-per-gallon (including the combination average of city and highway miles) amounts to about 21 MPG.

Handling and Braking: While this truck handles as well as most others, manufacturers do not recommend reckless off-road driving. Follow all safety and manufacturer recommendations to enjoy this vehicle to the fullest. Because of the Brake Assist option in some models, the Tacoma is able to reduce stopping distances by nearly 30%. This feature also enables the driver to stop quickly.

Towing Capacity: This pick-up truck has a reliable and impressive towing capacity and has been able to carry loads that weigh up to 3,500 lbs.

Length: This truck has a standard length (from head light to tail light) of 212.3 inches. This estimated length includes the engine, the cab and the bed of the truck.

Height: The height of a truck can help make it seem more superior to other vehicles. Height adds the advantage of a farther visible driving distance, and being able to see more at a greater distance is always a valuable thing. Most Toyota Tacoma newer models are about 70.6 inches tall. This makes out to be a comfortable height without the feeling of being too towering.

Width: The width of this particular Toyota Tacoma model can vary slightly, depending on the specific cab size. Width can range anywhere between 74.4 inches to 75.2 inches.

Safety Features: The new models come with great safety features, including knee airbags, side-impact bars, driver and passenger airbags, electronic stability, four-wheel ABS brakes, traction control, adjustable front head restraints, power door locks, daytime running lights, a full size spare tire, and much more. There are also optional features such as a tailgate/rear door lock that includes power door locks, panic alarm, and a security system. These are just a few of the awesome features that can be included in your Toyota Tacoma.

No doubt, the world of pick-up trucks can be fun and diversified. We were able to take a peek at the Toyota Tacoma horsepower and torque capabilities, as well as the top 5 competitors to see where each truck lined up. Hopefully this gives you some insight that will help you make the best decision possible, depending on your needs.