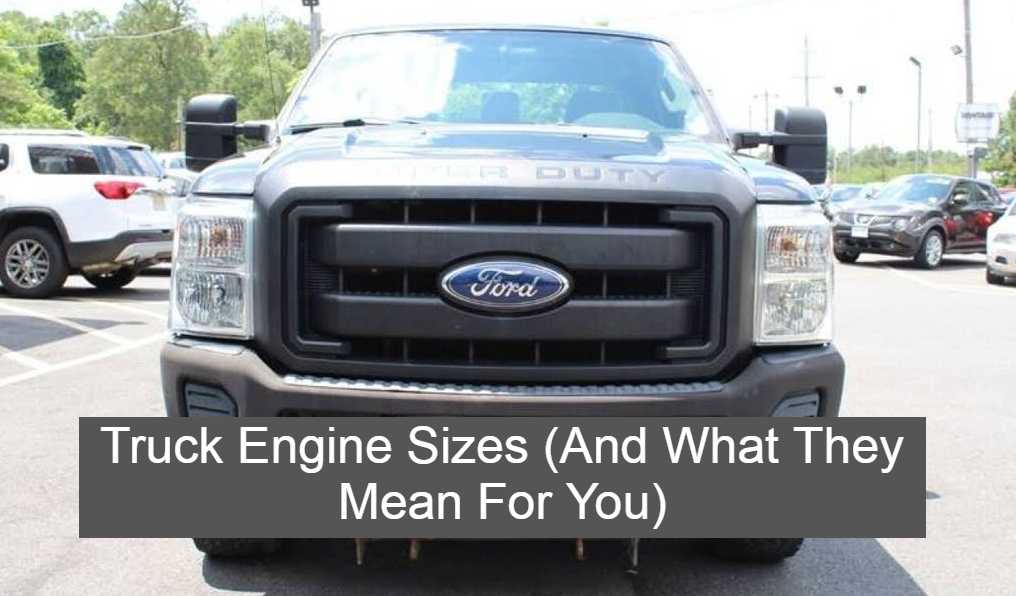 What you see from the outside of the truck is just the beginning of its allure; under the hood is the heart of the pickup truck, its engine.  I always wondered what the key things to understand about an engine and its size.  There are so many engine sizes, without research, it’s hard to know what you even have or decide what is the right engine size for me?

Let’s look the main types of engines and the parameters for engine size:

Smaller truck engines sometimes called a “light” truck will be more fuel-efficient and environmentally friendly.  If you’re not towing anything and want the independence of being able to move a tv or a pair of snow skis whenever you want, then a light-truck engine would satisfy those needs.  A midsize truck may still offer some environmental features while also being roomy and strong.  If you need to tow things occasionally, or you are the friend everyone calls when they’re moving, a midsize truck engine may be right for you.  A full size or “heavy-duty” truck will offer powerful towing capabilities and dependable performance.  The cost of expensive engine repairs from overworking a smaller truck’s engine will likely exceed the upfront costs of a larger engine.  If you’re hauling heavy things on a regular basis, a heavy-duty truck engine is best for you.

When it comes to engines, most people have heard of engine volume, horsepower, and even torque.  But knowing all the specs that make up an engine not only makes you more informed about a truck you already own but will also make any future purchases much easier.  You’ll need to consider the type of fuel, gas or diesel, how many cylinders it has, and if it has a turbocharged engine.

Aside from filling up at different tanks, gas and diesel engines are vastly different machines each with their own pros and cons.  Gas trucks are good if you’re just towing light loads for short distances.  But if you are towing a larger load for a long distance then a diesel engine may be best.

The US Department of Energy states that diesel engines are more fuel-efficient and contain approximately 10%-15%  more energy than gas-powered engines.  This means that they can go as much as 35% farther per gallon than gas engines.  This is why semi-trucks, city buses, and heavy equipment trucks have diesel-fueled engines.

Diesel engines are more expensive than gas engines.  On average diesel trucks cost $5045 more to purchase than the same model of a gas-fueled truck.  A big reason for this is emission standards for diesel engines set by the Environmental Protection Agency that allow them to burn their fuel in a cleaner manner.

Not only do diesel engines cost more to purchase but the fuel they run on is more expensive too.  Diesel fuel is assessed a higher federal excise tax than gasoline.  This tax is passed on to the consumer at the tank.  The cost of refining and producing diesel in the past 15 years has increased because of additional restrictions placed on the sulfur output of diesel fuel.  This cost is also passed on to the consumer.  The general rule of thumb is if you are planning to drive your truck 30,000 miles or more per year then it is worth it to pay a bit more per gallon for a diesel engine as you will save money in the long run even though the upfront cost and the cost of fuel per gallon is more.

Number of Cylinders and Cylinder configuration

When it comes to cylinders trucks engines come in 4-cylinder, 6-cylinder, and 8-cylinder varieties.  Basically, 4-cylinder engines have four pistons, 6-cylinders have 6 pistons and 8-cylinders have 8 pistons.  Pistons are the moving component wrapped in a cylindrical tube inside an engine block.  It is the up and down motion of an airtight piston connecting to the crankshaft that performs a round and round motion that turns the wheels of a truck.  Essentially the more pistons or cylinders your truck has, the faster your wheels can turn.

Most trucks measure their engine volume in liters which can be confusing at best.  Most pickup truck engines range from a light-duty 2.3L engine all the way up to Ford’s “Godzilla” the 7.3L engine.  Though 7.3L is currently the largest, GM is working on a new model that will boast a massive 8-liter engine.  What those liters represent is the displacement or amount of space, the cylinders take up in the truck’s engine.  A higher cylinder truck will have a larger liter engine to house all of those cylinders, with few exceptions.  A higher liter engine used to mean more horsepower and torque but with recent advances in technology that isn’t necessarily true anymore.

When thinking about the right engine volume for you it is best to consider your individual needs.  Owning a truck with a 7.3-liter engine may seem cool, but if you don’t need a pickup that large you could be wasting your money.  Not only will a larger liter engine cost more to buy, they are also known to be gas guzzlers.  Fuel economy isn’t a deciding factor for some consumers because some people just don’t drive all that much for it to matter.  Others may need the bigger engine to pull a trailer or haul heavy equipment.  A smaller liter engine may not be able to handle large loads.  Before deciding on an ideal engine volume size, consider what the truck will be used to do.

Don’t confuse Engine volume with the sound that a pickup makes.

A horsepower is a basic unit of measurement.  As its name implies it predates automobiles.  The term actually goes all the way back to the late 18th century.  It began with ponies working in coal mines when a man named James Watt used it to describe how many foot-pounds of work per minute could be performed by an average horse.  He estimated it to be 33,000-foot-pounds of work per minute.  Since then the formula has been applied to measure the potential of many different types of machinery including the truck engines.  Thankfully, there is no need to understand Watt’s horsepower theory to know why horsepower affects truck engines.  It’s no secret that prior to trucks horses were how people not only traveled distances but also how they hauled and towed things like carriages full of people and wagons full of cargo.  Truck engines are measured in horsepower because engines were invented to do the workhorses used to do.

Horsepower pertains to acceleration but is best described as the sustained power of your truck’s engine.  Most of the time, the more horsepower, the better the truck’s stamina which in turn affects its overall performance.  This is why you will hear salesmen talk about the horsepower ratings of their best-in-class models.   There are other factors to consider though.  When comparing a lightweight truck to a medium weight model with the same horsepower, the lightweight truck will accelerate from a stopped position faster simply because it weighs less.

Torque and horsepower go hand in hand.  Mathematically horsepower equals torque multiplied by rpm (rotations per minute) and then divided by a constant. In layman terms torque is the twisting force of a truck’s engine on the crankshaft.  That twisting force is the strength the engine uses to push-off from start. It is the truck’s “get up and go.”  Diesel and V-configured engines produce more torque at lower revolutions than regular gas-powered engines.  Engines with more torque move at the same speed at lower RPMs which make the ride much smoother.

Torque rises with engine speed to a point and then falls off.  Often engines with more torque are described to consumers as having more “pull.”  Higher torque means faster acceleration, especially when on an incline and more strength for towing when a heavy load is weighing the truck down.  If your needs don’t include pulling large loads or racing then torque isn’t going to be as important.  Knowing this could save you a pretty penny when if you’re searching for the perfect pickup truck.

Pickup trucks are built with torque in mind because they are designed to tow and haul. High-performance engines are tuned so that horsepower and torque complement one another. This increases power and endurance. Keep in mind that when a salesperson talks about how much torque a truck’s engine has, they are stating its maximum torque.  If you are looking for high performance in a truck engine torque is an important spec.

These new advancements have proved popular for pickup trucks.  For instance, the Ford F-150 3.5-liter is available with a turbocharged engine that gives the same power as their 5.0-liter V8 F-150, at a much lower RPM.  Because of the smaller engine, it also gets slightly better gas mileage.  But as you can probably imagine turbocharged engines come with a higher price tag.

Turbocharged engines tend to break down more.  More parts in your truck’s engine mean more things can go wrong requiring you to make expensive repairs somewhere down the line. Recent advances in the industry have made way for better, more compact turbochargers which have increased their reliability.  Because of this simply having a turbocharger is no longer a reason to eliminate a truck engine model that fits your needs.

Cost, efficiency, purpose, performance needs, and personal taste are the metrics to have in mind when deciding what size truck engine is right for you.  The one thing truck owners have in common whether they have a turbocharged, 4-cylinder, gas-fueled truck engine or diesel, 8L heavy-duty truck engine is that they love driving their trucks.  Please leave us a comment and tell us which truck works best for you and why.

4WD vs 2WD Trucks: The Ultimate Decision Guide
What’s A Dually Truck? Is it Needed To Tow A Travel Trailer?
RAM 1500 Problems: Complaints From Owners of Ram 1500 Trucks
What is Payload Capacity For A Pickup Truck?
When Is The Best Time To Buy A Pickup Truck?
Are Grill Guards Worth It? Do Grille Guards Work?
How to Make a Truck Louder? Is It Legal?
Is Driving A Pickup Truck Hard?